At Fallbrook High, Sydnee Caldwell made her mark in time 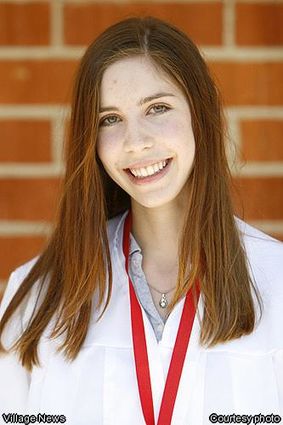 Time sped by for Sydnee Caldwell, valedictorian of Fallbrook High School’s Class of 2008. According to this 17-year-old graduate, “it seems like yesterday” she was celebrating the graduation of friends in the Class of 2007.

“I really don’t know where the last two years have gone,” Caldwell said. “I’m ready to graduate, but I don’t know how I have gotten to this point so fast.”

While Caldwell may feel time moved quickly, it is indisputable that she left an imprint on Fallbrook High School. Coming out of her seventh semester with a 4.519 grade point average, Caldwell not only kept up the momentum necessary to secure the title of valedictorian for her class but is also credited with an impressive list of involvements.

One of Caldwell’s greatest passions at Fallbrook High was the academic team. She was an avid participant all four years, serving as captain of the junior varsity team her junior year and of the varsity team her senior year. She won medals in multiple subjects. In addition to what she described as the “adrenaline rush” associated with the academic rigor of the competitions, Caldwell said the experience was especially sweet because of the friendships that resulted from it.

“I know I’ll never forget the academic team(s),” Caldwell said. “That is where I met many of my best friends.” The fact that all three academic teams – freshman, junior varsity and varsity – went undefeated this year is a credit to Caldwell, her teammates and coaches.

“They made me want to study science and become a doctor; it was a turning point for me,” said Caldwell, who is scheduled to attend the University of California at Berkeley beginning this fall to study molecular and cellular biology, a pre-med focus.

With a keen interest in language arts as well, Caldwell worked on the school’s literary magazine, KOPA. In her junior and senior years, she served as editor.

Solid four-year commitments are what Caldwell made at Fallbrook High. She served that term in the Model United Nations and held the position of secretary general her senior year, the California Scholarship Federation (CSF) and the Interact Club, serving as secretary her junior and senior year. And as she applied herself in everything, these extracurricular activities benefited from her passion for school.

“I wouldn’t trade [my Fallbrook High experience] for anything,” Caldwell said.

Five years ago, Sydnee Caldwell moved to Fallbrook with her family: mother and father Vicki and Richard and younger twin brother and sister Grason and Liza. Sydnee was born in Tennessee, where she lived until age 7, after which her family moved to Indiana. It was at age 13 that the family made the move to California – Fallbrook, to be specific.

“Because of a work transfer of my dad’s, we moved here,” Caldwell said. “I attended eighth grade at Sullivan Middle School .”

Reflecting on her high school years, Caldwell said, “My parents have been great. I wanted to do my own thing in school <as far as selecting classes>. They trusted me and let me take the classes I wanted.”

The trust her parents placed in her propelled Caldwell to make well thought out decisions, setting a framework for success.

“They supported and encouraged me and my independence,” she said. “It prepared me well. I’m not as fearful about college.”

That fact that Caldwell loves her community is no secret. It wasn’t easy moving from Indiana to California at 13, but in retrospect, she is very pleased.

“I love Fallbrook,” she said. “Moving to California was hard, but I’m glad we moved here.” It is the small town atmosphere in which people have gotten to know her that has made such a positive impact on this young woman.

“I walk into Caffé Primo <a local coffeehouse> and they know my favorite drink,” she said, laughing. “You don’t find that in a large city. This really is the Friendly Village.”

It is the Fallbrook Library that Caldwell has chosen to give her community service endeavors to, as she has done for three solid years.

“I love to read, so it seems natural,” she said. “It also gives me an opportunity to prescreen books to read. Everyone is so nice there.”

This summer, Caldwell has planned a two-week trip Europe with her father. “We are going to Paris, Germany and other places,” she explained. “I love Paris and this will give me a chance to practice my French.”

In addition, she will make a trip to Tennessee to visit family. Other than that, Caldwell said she is looking forward to having a lot of free time and indulging in her favorite pastime – reading.

The move to the dormitories at Berkeley will take place August 23, Caldwell said. “I am really thrilled to go up there,” she said, referring in particular to the academic regime.

“I am excited to meet and learn from some of the best professors in the country,” she said. “The academics will be a million times harder, but the opportunity to learn is great.”

Being more independent is also something that Caldwell finds stimulating. “It’ll be a really freeing experience,” she enthused.

Looking forward to the future, Sydnee Caldwell doesn’t fail to remember the past and the friends from Fallbrook High School she holds dear. She knows she will dedicate herself to the effort of keeping in touch.

“I’ve moved before and I know how hard it is to keep in touch with people,” she said.

Referring to those who will be going to schools like the University of Southern California and the Massachusetts Institute of Technology, Caldwell said, “There are two or three friends I know for sure I will keep in close touch with.”