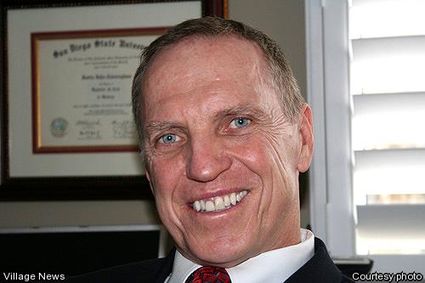 Justin Cunningham, who has worked with several small San Diego community school districts, has tentatively accepted the position of superintendent of the Bonsall Union School District. Cunningham’s role is expected to be made permanent following a vote of the board on June 30.

Cunningham has worked with the Alpine, Borrego, Jamul, Julian and San Pasqual districts and served on the committees used to help find superintendents for the different districts for 13 years.

So when Bonsall’s superintendent, Jeff Felix, accepted a position in the Coronado school district, Cunningham was called to help lead the search for a new superintendent, but found himself in the running for the position instead.

“I find that the timing for the offer to be superintendent was perfect,” said Cunningham. “If the position had been offered to me a few years ago, I would not have accepted. I have been offered different superintendent positions several times, but for one reason or another, it did not feel like the right one or the right time.”

Cunningham has assisted the Fallbrook/Bonsall area in the past and looks forward to working in the San Luis Rey valley because he feels that since there are so many new schools, there will be plenty of opportunities for academic growth.

“I believe that the area’s families can look forward to continued improvement from the district,” he said. “We have to align our plans so that everything moves smoothly and schools aren’t independent from one another but a true district, allowing them to focus on teaching and learning.”

But what Cunningham is most excited about is the chance to be able to start working with the curriculum in the district and adding features that will allow the students to be on the cutting edge of educational technology.

Cunningham’s idea is to allow students to be able to access their schoolwork and lessons via an online Internet portal, which would allow them to access their homework, lessons and projects from any computer with an Internet connection.

This idea will not only allow students to be more computer savvy but will allow for parents to be able to see exactly what their children are being taught as well as the progress that is being made.

The software will be used with the newest schools in the district because their computers are more up-to-date, making it easier to implement the program. It will be first introduced this coming school year at Bonsall Elementary.