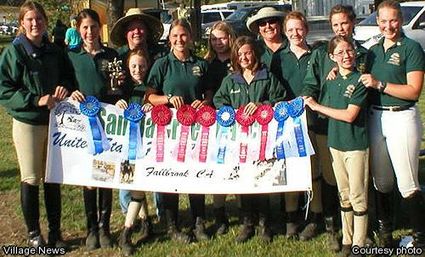 FALLBROOK — The recently approved Sandia Creek Ranch Pony Club Riding Center (SCRPCRC) has been busy at work. After recently celebrating their one-year anniversary, the center’s members thought they should take a look back at their first year.

After getting the Riding Center up and off the ground, Crystal Wylie, owner of SCRPCRC, decided that in order to prepare the new Pony Clubbers for the up and coming rallies (horse shows), a “model horse” rally was in order.

All members from age 6 to 15 participated and there were many different activities for the kids, from learning how to present to a judge to memorizing an actual jumping course.

Following the “mini” hours of fun at the model horse show, the Pony Clubbers packed up their tack and headed to the horseless rally.

This was run just like a rally; however, there were no horses, so the participants were really able to learn all about how a rally was run, what the judges look for, how being the stable manager was so important and, most importantly, how to be a good team.

After the horseless rally, the Riding Center members felt like they were ready to take on their first rally with the horses. They took two full teams to the Southern California Regional Dressage Rally, where they were all judged on their riding in a real dressage arena while demonstrating eloquent styles and movements.

The SCRPCRC took first and second among the 12 teams that participated. All the other teams had been to previous rallies and were very experienced. SCRPCRC member Mckenzie Huff, D-3 rating, even took overall first place for stable manager.

After all those shows, the kids, as well as trainers, were slightly exhausted, so they had a mock horseshow for all ages. With the younger kids riding and the older kids judging, the event was a learning experience on all ends of the spectrum. After all this, the club is looking forward to a nice summer to relax on vacation… and maybe go to a few camps.