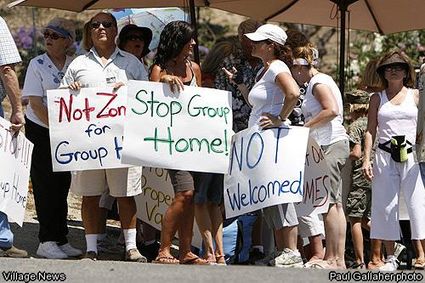 A group of neighbors who live on Los Alisos Drive in Fallbrook have banded together in hopes of stopping a transitional home for boys from operating out of a single-family residence in their neighborhood because they fear the boys will cause mischief in the area and cause their homes to decrease in value.

Michelle Johnson, one of the Los Alisos residents, claims to have found two women living in the home without water, gas or electricity and said she thought they were squatters.

After law enforcement was contacted, Johnson found out that the women had been sent by Gilbert Garcia, a man who runs several transitional homes in Los Angeles County, to prepare the home for occupancy by the boys. The women had leased the home, which was listed for sale with a local real estate company.

Osmana Nagata, another Los Alisos resident, was worried about “what kind of people” were coming into the community and called Garcia to get the details of the situation and see how many people were actually going to be living on the property. Nagata said when she spoke with Garcia he told her the home would house 20 children between the ages of 12 and 18.

“We don’t believe the neighborhood is designed for a home like that,” Nagata said. “Only six people can live in the house, because that is what zoning allows. We became even more upset because we are talking about 20 kids in the house.”

Neighbors were concerned that with that number of individuals, and possibly more, coming and going from the property, it would devalue the quiet neighborhood they prize.

“This is a very desirable community to live in; it has a quiet, country-like setting and there is a lot of pride in the neighborhood,” Nagata said. “A group home of any kind would diminish that because you have a group of people who aren’t really a part of that community but just come and go. I’m not saying that the home shouldn’t be in Fallbrook, but I think the outskirts of town [or other areas] would be better options.”

In an effort to stop the group home from beginning, Nagata said neighbors began e-mailing each other and called the zoning department, code enforcement and Fifth District Supervisor Bill Horn’s office.

Neighbors also staged a protest in front of the property on June 19 and circulated a petition throughout the area, asking people to indicate their opposition to the home. The real estate agent who had leased the home to the women locked them out of the residence.

Garcia says the reaction from the neighbors was “unnecessary” and that the women on-site hadn’t been living in the home but had been sent to begin preparing the house for the boys, who weren’t scheduled to arrive until July 1.

Garcia’s opinion was that the women were treated unfairly and shouldn’t have been because they were “outstanding citizens meant to be teachers and counselors to the children.”

He went on to say that the boys who were going to be placed in the home weren’t delinquents but children who were displaced because their parents were in prison or for other reasons. Garcia said he felt the neighborhood would have been a positive place for them to learn how to socialize properly as well as become better individuals.

“If you look at how boys’ homes are run, a lot of them fall short because they stick the boys in the same tri-city area that causes the same conflicts for them,” Garcia said. “It doesn’t really let them look at life from a different vantage point. When you put kids in a tranquil setting, they become very positive, very receptive to positive change.” 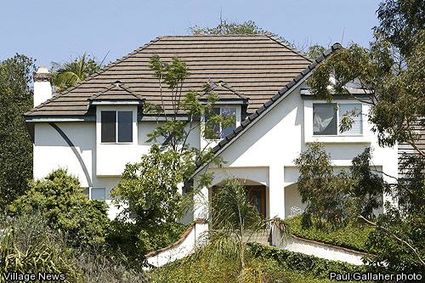 This residential property on Los Alisos is the one that the protest was held in regard to.

“The [Los Alisos] area seemed like a serene, tranquil environment that would be nice for anyone to live in, and from what I understand, there are a lot of families living there,” Garcia added.

The owner of the property was unavailable for comment, but according to the Los Alisos residents, he now wants to “short sale” his home. Garcia said he is legally entitled to the property for the next five years but doesn’t think putting the home there would be beneficial to anyone involved.

“What happened should never happen to anyone coming to provide service to the community,” Garcia said. “I’m giving some thought about how I’m going to work this out. It got really ugly with the people who were involved. If the community is not receptive, the program isn’t going to have a positive influence.”