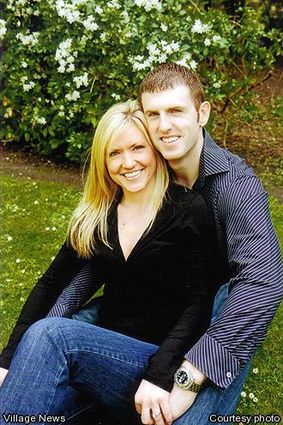 Dr. and Mrs. Philip Roberts of Fallbrook are happy to announce the engagement of their daughter, Dr. Heather Roberts, to Captain John Deloney.

Heather is a dentist and captain serving in the US Air Force and stationed at RAF Lakenheath, England. She is a 1997 graduate of Fallbrook High School, where she played field hockey and was a member of CSF. She earned her Bachelor of Science from the University of California, Davis in 2001. Her commissioning as a 2nd Lieutenant took place in 2003.

Heather received her Doctor of Dental Surgery degree from the University of the Pacific, School of Dentistry, San Francisco in 2005. She currently resides in Bury St. Edmonds, Suffolk, England.

John is the son of Colonel (USMC Ret.) and Mrs. Ronald Deloney of Johnson City, TN. He is also serving as a captain in the US Air Force stationed at RAF Lakenheath, where he is an F-15C pilot with the 493rd Fighter Squadron.

The couple met in England in 2006 and became engaged in Paris in February of this year. They are planning an autumn wedding in San Diego.