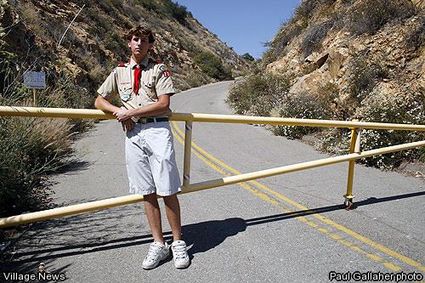 Fallbrook High School graduate Bobby Shuster, 18, at the access road to the proposed Liberty Quarry, is producing a documentary on the controversy for his Eagle Scout project.

Instead of opting out for a low-profile community service project, Bobby Shuster’s pursuit of Eagle Scout honors has plunged him into one of the area’s thorniest land use debates.

In order to earn Scouting’s highest ranking, Shuster has created what is believed to be the first documentary on plans to blast and carve a 414-acre mining operation out of the granite-strewn hills south of Temecula.

In doing so, the recent Fallbrook High School graduate takes a fresh and balanced look on a development proposal that for years has galvanized residents of Temecula, Rainbow, Fallbrook and Bon...