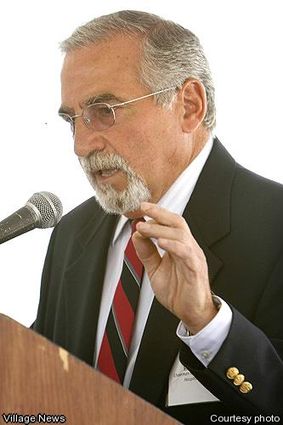 Dr. John Piconi, chairman of the Physicians Hospital of Murrieta board, explains the project Tuesday, July 8, during a press conference at the future site of the hospital. The 106-bed facility is scheduled to open in January 2011.

Officials recently announced the finalization of a deal that will put a hospital in Murrieta.

Loma Linda University Medical Center has signed a deal with Physicians Group of Murrieta LLC to build a $301 million medical campus, according to a press release.

The campus will stretch over 50 acres at the intersection of Antelope and Baxter roads in northwest Murrieta.

The campus will go up in two phases. The first phase, scheduled to break ground in November, will include a hospital tower and two office buildings. They will provide 106 patient beds. Officials expect the campus to be operational by January 2011.

The timeframe of the second phase’s construction is less certain, according to the press release. Officials hope to begin construction 18 to 24 months after the first is opens. The facility will provide 114 additional beds.

Representatives from Loma Linda, Physicians Group and the City of Murrieta met at the site of the future medical center to discuss plans.

“I can tell you today we are taking a major step in increasing the availability of the medical center in this region,” Murrieta Mayor Rick Gibbs said at the meeting.

The region is currently underserved, according to Dr. Eric Frykman, the director of the County of Riverside’s Community Health Agency.

Moreover, the population is growing and healthcare is not keeping up, he said. By 2020, the southern part of the county will have 1,400 beds less than the minimum needed to serve the population.

This project, along with several others currently in the works, will add more than 400 hospital beds to the region, he said.

Currently, 65 percent of Riverside County residents leave the county for healthcare. Hospitals in the county provide one bed for every 1,000 people. This is a much lower bed-to-person ratio than the national average of one to 370, a press release stated.

Most residents have good reason to leave the county for more complex procedures, Gibbs said at the meeting. “Such procedures are best done by people…who do them 100 times a year.”

The campus will draw residents to the region, he added. According to the press release, it will create 710 jobs with an estimated payroll of $42.5 million.

“If you build it they will come… People want to live here and they want to be affiliated with an academic institution,” Frykman said.

An investment group made up of 70 local physicians and Surgical Development Partners, a hospital developer based in Tennessee, is funding the project.

Making money is not, however, the primary motive for building the facility, according to Dr. John Piconi, the chairman of the hospital’s board.

“Profits should not be a motive,” he said. “There were some doctors who were there for profit and we asked them to leave and they left.”

The hospital will include six “state-of-the-art” surgical suites, robotic surgery, an imaging center, complete emergency room care, general and acute-care services and medical specialties, such as interventional cardiovascular, obstetrics, pediatrics, urology and orthopedics, according to the press release.

A poster displays a computer image of the planned Physicians Hospital of Murrieta, situated at the intersection of Antelope and Baxter roads.

Barbara Ankele, a Murrieta resident who spoke at the meeting, said she frequently takes her daughter to San Diego Children’s Hospital. The hospital will be a relief for parents like her from the region, she said.