Students urge drivers to slow down, save gas 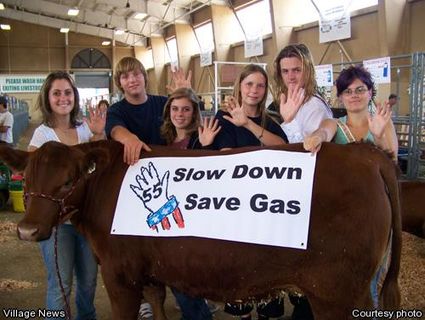 DEL MAR — Fallbrook High School FFA members recently teamed up with members of the San Marcos FFA and others in a “Slow Down – Save Gas” movement.

What started as a student-led initiative in the French and German classes at Carlsbad High School and spread to the agricultural classes at San Marcos High is now spreading throughout San Diego County.

At the 2008 County Fair, the San Marcos members of the Future Farmers of America (FFA) began recruiting fellow members to join the movement to drive freeways and highways at 55 mph, holding their left hand out the window showing all five fingers spread in a gesture intended to urge fellow motorists to also slow to fifty-five.

“The energy crunch is quite real,” said Julianne Duffin, whose father is one of the instructors for the Fallbrook High School FFA. The students typically spend many days at the fairgrounds during the three-week-long event, particularly the last week, when their animals are judged and auctioned off.

“In the past some students would go home to Fallbrook briefly, but this year we are all camped here for the entire time. No one wants to pay for the gas to go home and shower,” explained Duffin.

Kevin McGuire, another Fallbrook student joining the “Slow Down” movement, notes that it is more than just saving money by getting better gas mileage that attracted him to this effort. “As Americans seek alternative fuels, the subsidies for ethanol are driving up the price of the feed we need for our animals,” he said.

McGuire points out that while the corn used for ethanol is low in nutrition and high in sugars which are converted into fuel, the price subsidies for ethanol are making farmers choose to grow the ethanol-producing varieties as opposed to the feed variety, containing the nutritious vitamins and minerals needed in animal feed.

“We can’t fault the farmers for growing the crops that get them the best price, but we soon will have to begin to import corn for animal feed,” continued the Fallbrook High senior. “Slowing down our fuel consumption by simply slowing down our speeds on the highways is positive for both our pocketbook and for our national independence.” 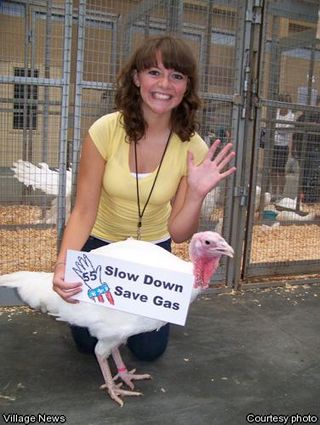 The idea that by simply slowing down one can extend their gas mileage spread quickly between the various high school groups at this year’s fair. “As it spreads around San Diego County, we hope it will begin to spread nationwide,” said Dina Davis.

“I believe the students will be successful,” says Helen Nielsen-Eckfield, a self-described soccer grandma who is helping the students with their campaign. “As America prepares for presidential elections in the fall, politicians are proposing everything from offshore oil drilling to drilling in the arctic wildlife preserve, to futuristic supply side solutions like converting algae to fuel.

“It is the students who must live with the reality that they must create their own future – not have someone else ‘solve it’ for them. Perhaps it will be the students who will lead America toward patterns of responsible energy consumption.”