Christ The King to hold fundraiser for cancer victim 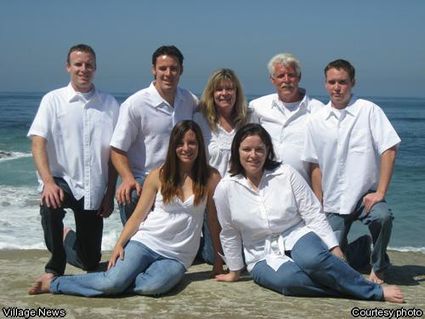 The Worley family: (top, from left) Nolan, Tanner, Colleen, Paul, Jordan, (bottom, from left) Whitney and Marianne. A fundraiser for Paul, who has cancer, will be held at Christ The King Lutheran Church on Sunday, August 3, at 12:30 p.m.

A fundraiser to be held at Christ The King Lutheran Church, located at 1620 South Stage Coach Lane in Fallbrook, will benefit cancer victim Paul Worley and his family. The barbecue lunch on Sunday, August 3, at 12:30 p.m., just after the last church service, will be ten dollars per person.

Paul was diagnosed with an aggressive brain tumor and has already received a bill for $191,000 for a ten-day hospital stay. On April 21, he was flown by medical helicopter to Palomar Hospital.

However, it is not just the medical bill situation that is putting a financial stranglehold on the family, but the fact that Paul has been the family’s sole provider and is now unable to work. Worley, 61, has worked in the construction industry locally.

During the lunch a silent auction and a raffle will be held. Business owners and other community residents have been very generous in their donations. One of the auction highlights is a three-hour cruise around San Diego Bay on a 60-foot wooden sailing yacht. This classic vessel is owned by Frank and Cindi Valli and will be piloted by Frank. Other silent auction items include water purifiers, spa treatments and various gift baskets.

Cindi, who has been friends with Paul’s wife Colleen since their college days, has been instrumental in generating support for the family. She struggled with her own brother’s cancer and has an idea of what the Worley family is up against. “It will be really hard for them,” she commented.

Paul’s surgery has been scheduled for July 21 due to the fact that he has now obtained health insurance. The surgery will be performed at Mercy Hospital in San Diego. In an earlier article, the Village News reported that Worley did not have health insurance and thus was unable to have the crucial surgery, but since the publication of that story he has been approved for Medi-Cal.

Paul coached baseball locally for about fourteen years while his children were growing up. Colleen was the manager for the Fury girl’s soccer team for five years. The family has lived in Fallbrook since 1989.

The Worleys wish to express their appreciation to the community for the outpouring of support they have received thus far. “They are grateful to everyone for their prayers, concerns, help and donations during this trial they are going through,” mentioned Cindi.