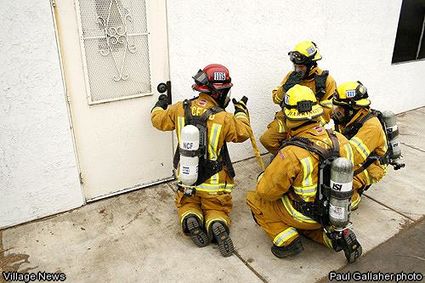 North County firefighters prepare to enter a building during a search and rescue drill Wednesday, July 9, at Bonsall Elementary School. Firefighters were able to train using several of the campus buildings, which are scheduled for demolition. Firefighters from Camp Pendleton Fire and Cal Fire participated in the training exercises as well.

The North County Fire Protection District (NCFPD) board has approved a resolution that will allow a temporary transfer of funds from next year’s anticipated tax revenue in order to be able to meet the fire district’s financial obligations for the rest of the year.

The board made the decision at the regular meeting of June 24 and the transfer of funds will allow NCFPD access of up to 85 percent of next year’s property taxes, which equates to more than $11 million.

The temporary funds transfer resolution is a part of a program used by many districts throughout the state but is something new for NCFPD.

In the past, the district had nearly $4 million in its reserve accounts that it would use to loan money to itself to continue normal operations when it would have periods of negative cash flow. The money would be repaid at the end of every year after receiving the property taxes from the county. This was usually more than enough to cover the rest of the year.

Last year the amount of money needed to run the district was more than what was available in the reserve, so the district board voted to take advantage of the fact that the county would advance the money needed.

Even though the district was allowed as much as 85 percent of the budget, NCFPD Chief Bill Metcalf said only a “small percentage” of the budget was actually used and was immediately paid back as soon as the property tax payment arrived.

“It is not a matter of the budget having exceeded the amount of tax dollars; it is a cash flow issue,” said Metcalf. “Every special district in the state lives off property taxes as the primary source of revenue and we don’t get the first big payment until December. Every special district has the problem of still having to do business after July first until December with no money coming in.”

Metcalf said North County Fire is in better shape than most districts since it has a healthy reserve to rely on, whereas many other districts in the county do not have a significant amount of funds in reserve.

While the county does charge interest for advancing the district the money needed, Metcalf feels the option is actually more financially responsible than the district’s prior practice of using its reserves, because only funds that are necessary to bridge the cash flow needs of the budget are transferred and the reserves are left untouched in savings to accumulate interest. 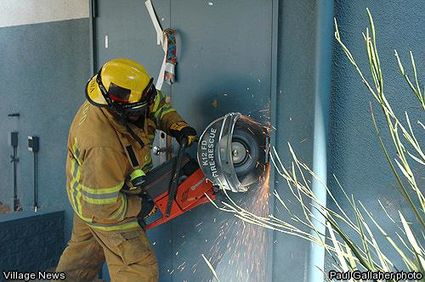 Firefighters were able to practice forcible entry to gain access to the inside of buildings at the school demolition site, thanks to Bonsall Union School District and Erickson-Hall Construction Co. Training also included vertical ventilation, large area search and rescue, rapid intervention and firefighter survival.

“By leaving our reserve funds on deposit, it makes more interest than it costs us to have the county advance us the money,” explained Metcalf. “We are actually going to make money by doing this rather than loaning it to ourselves. We lose interest on those funds when we were using them to operate. This just allows us to do business as normal and helps us enhance our revenue.”

Ruthie Harris, NCFPD board president, feels that the decision allows the district to provide the same services it always has and show the district’s awareness of the economy.

“It has been a tough year because of the economy, so we made adjustments just like everybody else,” said Harris. “I feel the board and the district are being very, very responsible. We never spend over budget; we are more cautious about spending. You have to be fiscally minded but you cannot sacrifice any type of service.”