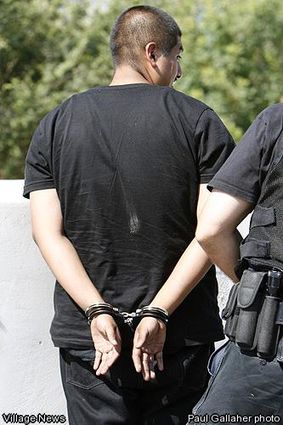 An officer handcuffs a suspect in downtown Fallbrook Saturday, July 19, during a special operation organized by the Fallbrook Sheriff

For the second time in a little over three months, officers from multiple agencies combined strength to power a special law enforcement operation in Fallbrook on Saturday, July 19. This sweep, conducted by a team of 60 officers, resulted in 28 arrests and an additional 22 individuals cited and released.

“This was extremely effective in getting some people off the street that needed to be off the streets,” Sheriff’s Lt. Alex Dominguez said. “There were also many, many field interviews conducted with gang members.”

Nine of the 28 arrests made resulted in formal deportations by Imm...