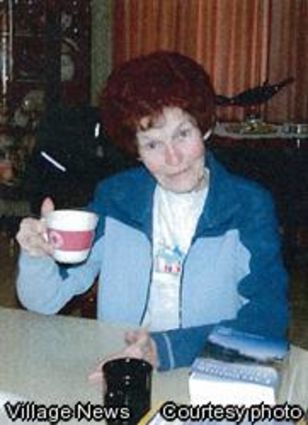 Irene Farr, 84, of Fallbrook went to be with the Lord on July 7, 2008. A devoted and loving mother, grandmother, great-grandmother and friend, she was preceded in death by her husband Charles Farr. She leaves behind daughter Dona Speights, Prescott, AZ; son Dr. Gordon Chelune, Sandy, UT; four grandchildren; three great-grandchildren; and sister Verna Williams, Pennsylvania.

Born in Pennsylvania, Irene joined the WACs at age17 during WWII and worked both in the motor pool and as an ambulance driver. She was discharged as a corporal and received several ribbons for her devotion to duty and unwavering commitment to America. In 1951 she moved from New York to Long Beach, CA, with her family. After a brief stay in Hawaii, she settled in Fallbrook in 1972.

As a longtime resident of Fallbrook, Irene will be best remembered for her fiery red hair, never-empty cup of coffee and her searches for “treasures.” She always had the gift of gab, openly giving her opinion, and was often seen combing garage and estate sales all over the Fallbrook area.

Arrangements to spread her ashes in the ocean off Oceanside Pier were handled by Berry-Bell & Hall Mortuary of Fallbrook. There were no services per Irene’s wishes. We miss her more than words can say.