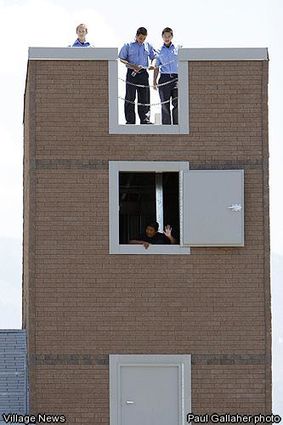 Fire explorers and visitors peer out from the four-story training tower at the new Pala Fire Station after the grand opening on Saturday, July 26, 2008.

The state-of-the-art facility will house personnel and equipment, function as an emergency operations center and provide a training center for regional firefighters.

“We have had this as a goal for many years, and after two years of construction I am proud to announce the grand opening of Pala’s new fire station and training academy,” said Pala Tribal Chairman Robert Smith, who formerly served as Pala Fire Chief.