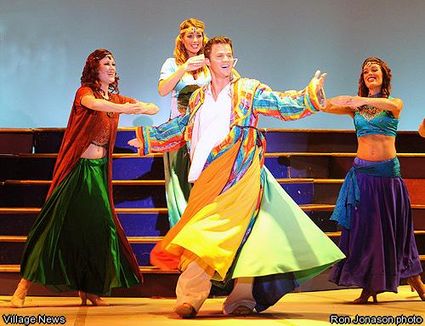 A Bible story turned to a flashy and splashy musical is what “Joseph and the Amazing Technicolor Dreamcoat” is all about. With lyrics by Tim Rice and music by Andrew Lloyd Webber, the work was first produced 40 years ago at a London school. This award-winning British team also produced “Jesus Christ Superstar” and “Evita.”

The story is about Joseph, a young man who possesses the power to interpret dreams and is his father’s favorite son. His eleven brothers are jealous because of Joseph’s favor with their father and are especially jealous of a symbol of that favor: a “coat of many colors,” or in the Webber/Rice world, his “Amazing Technicolor Dreamcoat.” The story is one of betrayal and reconciliation and restoration, but this play isn’t so much about the story – the story is just the vehicle used by the now-famous team to produce a colorful musical.

Since this is the first time I have seen the play, I’m not sure what I was expecting, but it was nothing like what happened. Throughout the story there is a voluptuous blond dressed in screaming red Vegas sequins who sings her way through the production as a kind of narrator. At one point, Joseph’s brothers don French berets and accents. Another musical number by the brothers has an old West flavor to it. Some of the lines sung are, “We’re great guys but no one seems to notice,” and “This coat has got our goat.”

Joseph’s jealous brothers sold him to some passing merchants on their way to Egypt. In Egypt Joseph is imprisoned because of a betrayal by his wealthy owner’s wife. Eventually, he is released to interpret Pharaoh’s dreams, then because of the success in the interpretation, he is made the number two man in Egypt under the Pharaoh. The dream was significant because it told of a coming famine and gave the Egyptians the ability to prepare for the famine. Joseph’s family comes to Egypt during the famine to find food. Eventually Joseph reveals his identity to his brothers, then his father is brought to Egypt for a happy reunion.

James Royce Edwards stars as Joseph and the energy emanating from his performance is electric. Edwards’ dancing and singing pops from the stage like a firecracker. Paul Clausen is busy portraying three characters – Pharaoh, Jacob and Potiphar – and does a marvelous job in distinguishing between the three. Stephanie Burkett Gerson is the narrator in red who adeptly sings the story in a strong and beautiful voice.

The choreography is well done and the scene portraying Joseph flaunting his long coat is sensational. The coat unravels in a rainbow of colors and is twirled about the stage by dancers. Strobe lights add to the effect. In another scene which takes place in Pharaoh’s palace, the singers/dancers who portray Joseph’s brothers come up with a calypso beat for their number. In one of the concluding songs they sing, “Joseph dreamed a lot, but what he dreamed he got.”

When you get up from your seat because you think the show is over, you have to sit back down because you were mistaken – there is more to come. After the last scene the curtains fall and then rise again – maybe a symbol of the rise and fall and rise of Joseph? In the remaining minutes the dance team, dressed in t-shirts, sing what they call a “MegaMix,” which is a reprise of the show’s tunes but without the sets or costumes. It is nice to hear the songs again, but I think they are more effective with the full theatrics.

Moonlight Stage Productions and the City of Vista produced the musical, which will run through August 10 at the Moonlight Amphitheatre at Brengle Terrace Park in Vista. The orchestra is conducted by Dr. Terry O’Donnell and the director and choreographer is Carlos Mendoza. For further information log on to http://www.moonlightstage.com or call (760) 724-2110.