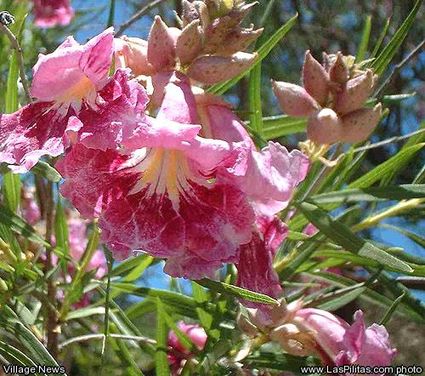 Trees with showy blooms are always a valuable addition to any landscape, but it is rare to have good bloom quality along with drought tolerance and a summer bloom period peaking during the high heat of the season.

How lucky we are to have such a beast indigenous to San Diego and Riverside counties!

The lovely desert willow, Chilopsis linearis, is not a true willow, but is so named because its long narrow leaves are reminiscent of a willow’s leaves. In fact, its closest common garden relative is the jacaranda tree.

At about half the size of the jacaranda, with pink or magenta blooms rather than purple and blooming much later in the season, you could be forgiven for not noticing the relationship. The main family resemblances are the large tubular flowers of both trees and the incredible show each puts on for the whole neighborhood to see.

The desert willow comes from desert washes throughout the southwest and does well in those extreme conditions but is also a fabulous tree in coastal and foothill areas of Southern California.

In nature it sends down a taproot to reach the water table. This ready access to water allows the tree to bloom late in the season when all the cactus and brittlebush are well into summer dormancy.

Since its roots are accustomed to constant water the desert willow does well near water in the garden, growing well in lawns, for instance. However, it is also can be grown very dry, given only occasional deep soaking once established.

If your conditions are right this tree can often be grown without any supplemental water after it has naturalized to your site. Its Achilles’ heel is poor drainage. Avoid heavy clays and hardpan and the desert willow will grow almost anywhere else.

Also check out a hybrid of the desert willow and a tropical catalpa tree called “Pink Dawn,” Chitalpa tashkentenis. Pink Dawn has become a common street tree in our area. It is slightly less drought tolerant than its desert willow parent but has larger pink blooms and larger leaves. In other respects the two trees are very similar.

Clayton Tschudy is an ecological landscape designer and the assistant manager of Las Pilitas Native Plant Nursery in Escondido.