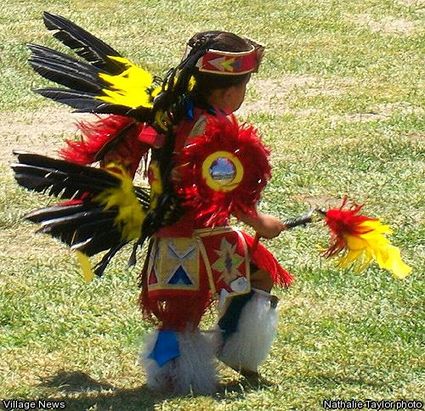 Young and old danced in the

Under the stark mountains in a valley just east of the bustle of I-15 live 600 members of the Pala Band of Mission Indians. The tribe totals 867 members in all, but the rest of the tribe members live elsewhere.

In the shadow of the mountains these native people held their inaugural powwow from August first to the third.

“Powwow celebrations and contests are at the very heart of our Native American history,” said Pala Tribal Chairman Robert Smith. “This celebration is a time for family, a time to reflect and honor our culture and also a time to have fun.”

There were booths that offered Native American arts and crafts, such as Navajo turquoise jewelry, Papago Indian baskets, handmade Navajo arrows with flint arrowheads and other fascinating items.

For lunch I feasted on a delicious Navajo Taco, which was fry bread layered with lettuce, pinto beans, cheese, white onions and tomatoes. It was something I could readily find when I lived in Utah, but rare in our area. To complement the taco I ordered homemade strawberry lemonade, which cooled me off in the 85-degree heat.

The clever powwow organizers erected a shade in the form of a circle; and within that circle the colorful pageantry took place.

The shade was fashioned with willow trees found nearby. It was not only functional, but the dry willow leaves tinged the air with a fragrant woodsy scent. Willow trunks served as poles to support the roof, which was formed of willow branches and leaves. It took the workers an entire day to build the shade, which resembled an arbor.

One tribe member told me that the use of willow in such a manner is a traditional Mission Indian craft, created because the shade not only shields the people from the sun, but the willow is a natural insect repellent. I was impressed with their Indian ingenuity born of a close relationship to the earth. How clever it is to create multiple uses for one natural object and to discover hidden attributes of something found in nature. This tribe member went on to explain that their ancestors also used willow to keep insects away from food by weaving baskets from the small twigs and leaves. They would then cover the top with willow leaves to doubly ward off the pests.

Echoing drums and haunting chants filled the air as families and friends sat under the willow shade enjoying the celebration.

Tribes from various regions throughout the United States came to celebrate with ceremonial dances, songs and drum beats. The vibrant notes of the drums would rise to a crescendo, then flatten to a softer tone.

The outfits worn were traditional, complete with sacred feathers, rainbow-colored beads, and bells. Elaborate and intricate headpieces, some adorned with feathers and beads, were also worn by participants. Dresses decorated with small tinkling bells were called “jingle dresses.”

Saginaw Grant, of the Sac-n-Fox, Iowa, and Otoe-Missouria Nations, was the head dancer at the event. With a regal bearing he was dancing with his family in the “dry lake,” as the announcer described the area within the willow shade circle.

However, it was not Grant’s regalia that drew the attention but his demeanor. Solemn but expressive, he exuded an air of spirituality that emerged from deep within his soul. He is an individual who emanates strength and a quiet confidence.

Grant’s grandfather was a medicine man and as a child he witnessed many spiritual ceremonies which left a lasting impression.

This man who is a well-known actor in Hollywood is also a very humble individual. It is easy to see why he is a much-sought actor who has played a medicine man and tribal chiefs in many films and television shows.

Among the many tribes outfitted in their unique garb and dancing their area-specific dance steps, one small dancer stood out as exceptional.

This one dancer, about the age of four, was dressed in full tribal garb. Dancing various steps he exuded the confidence that he knew exactly what he was doing. It wasn’t play, or a game, nor a show, and he realized it. His small steps were part of his heritage and he danced with the confidence of one who understood the spiritual significance of his actions.

When I left the “dry lake” the dancers were still active. With bells jingling and feathers swaying, they moved in a circle to the reverberating rhythm of the drums. It was a sound that has been heard in Pala for more than a hundred years, and elsewhere on the continent for thousands of years.

As the drum sounds rose to the sky, somewhere within that circle was a small boy stepping to the beat as so many ancestors before him. 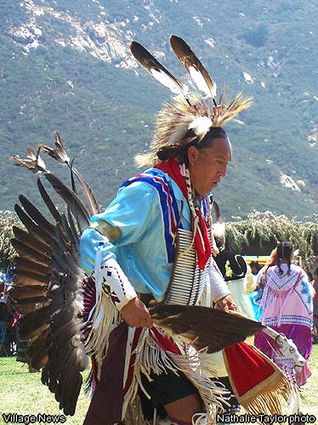