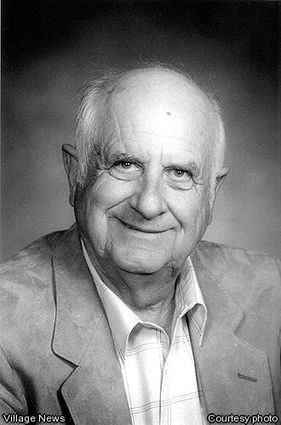 “North County has lost one of its finest citizens…”

Ross Daily, who was instrumental in the community of De Luz and who was also a founder of Rainbow Municipal Water District, passed away August 7, 2008, at the age of 92.

Daily was admitted to Fallbrook Hospital the morning before his death after taking ill the night of August 5. He passed away in the early afternoon.

“He was the heart of De Luz Heights,” Manchor said. “De Luz Heights wouldn’t have been made if it wasn’t for him.”

He served on the county’s planning commission, on the boards of two banks and owned a saw sharpening company as well as farms in De Luz and Rainbow.

“Ross Daily was a true pioneer, a great patriot and a good friend. He was a kind and generous man who looked after the community in an extraordinary way,” said County Supervisor Bill Horn.

Daily, the third of 11 children, was born October 17, 1915, in New Hampton, MO. His father was a farmer and sheriff. Daily and his first wife, Helen, were childhood neighbors and their parents were best friends.

Daily moved to Los Angeles in 1936 to find employment. Helen joined him after their marriage on March 2, 1937. They were married for 60 years until Helen passed away in April 1997. The couple had two daughters, both of whom now live in De Luz.

Daily began work at Mueller’s and later worked for Advanced Saw Works. Shortly after the beginning of World War II, he invented a machine in his garage to sharpen saws for airplanes. Because of the value of his service to military aircraft, Daily did not serve in the military.

Daily Saw Service was based in Southgate and eventually became a partnership when Daily was joined by one of his brothers. The company was sold in the mid-1970s.

Daily and two Advanced Saw Works coworkers purchased land in Rainbow in 1948 and Daily built a house in Rainbow in 1957. His second wife was a member of the family who had brought the Dailys to Rainbow.

Daily and others aware of the necessity of water service tried to get the Fallbrook Public Utility District (FPUD) to annex the new area in Rainbow, but FPUD was not willing to extend its service. Daily and nine others put up $2,500 apiece to create a water district which included not only Rainbow but also Bonsall. Daily was one of the initial directors of the Rainbow Municipal Water District.

Daily purchased 500 acres in De Luz in 1958. “When he bought the land there was only one dirt road,” said his older daughter, Joan Rose.

When Daily built the roads in De Luz Heights, a helicopter dropped toilet paper over the best courses for the new roads. The bulldozer then followed the path of the toilet paper, not only guiding the driver but also keeping him from driving the bulldozer off a cliff.

Ross Lake, which encompasses approximately 10 acres, was built by Daily in 1961. The lake was not affiliated with the eventual De Luz Heights Municipal Water District, and Daily also turned down a government offer to pay for three-fourths of the lake. He maintained operation of that body of water until his death. The community’s annual picnic at Ross Lake had its origins with a fishing contest and fish fry.

Daily attended this year’s annual picnic in July. “He was just so happy,” Manchor said.

As had been the case in Rainbow, Daily’s first preference was for De Luz to be annexed to FPUD, and once again FPUD’s board of directors showed no interest. Daily spoke with Fallbrook engineer George Yackey and with Rainbow Municipal Water District attorney Bill Dennis, who offered to help start a De Luz water district for $2,500 apiece.

“He knew how to get things done,” said Dick Wright, who returned to De Luz in 1970 after spending part of his childhood in the Sandia Creek area.

On September 25, 1962, the voters of the proposed De Luz Heights Municipal Water District approved the district’s formation. At the time the district consisted of approximately 11,880 acres, most of which were undeveloped.

Daily went to the Bank of America in Fallbrook, which told him that the bank would give the district a loan if Daily would sign the promissory note. Daily gave the bank a passbook to hold until the note was paid. The money was used to run the first water line to a 100,000-gallon tank.

CSA No. 20 was formed in 1970 to provide road repair for Daily Road and other roads in De Luz Heights, and the Permanent Road Division zone covers 19.4 miles of road in De Luz along with maintenance of nine street lights. Daily was still the advisory committee president at the time of his death.

“He loved this place,” Rose said. “He loved his community.”

In addition to developing in Rainbow and De Luz, Daily also developed property in Menifee and Lake Elsinore. “He loved doing it,” Rose said.

“He was a doer. He was always doing things,” Wright said.

Wright’s house burned down in 1985 and Wright noted that Daily provided him with replacement nursery equipment as well as housewares. “I’ll never forget his kindness,” Wright said. “He helped anyone. If anybody had any problems he’d intercede for them.”

Manchor also remembers Daily’s kindness in a time of adversity. “He was the first person I met out here in De Luz,” Manchor said. “I had just got back from the Gulf War and my car broke down. He showed up and fixed it.”

Daily was in his mid-80s when Manchor revived the De Luz Volunteer Fire Department and thus was not involved as a volunteer fireman under Manchor, but he was a member of the original volunteer fire department.

After the County of San Diego ended its contract with the state for fire service, the De Luz Volunteer Fire Department was formed in 1975.

Daily’s son-in-law, Bill Rose, was the first fire chief, while Daily participated and also built the first fire station on the end of the Roses’ property.

When the county stopped funding the volunteer fire department in 1981, it disbanded until Manchor reinstated it 18 years later.

“He was just one remarkable person,” Manchor said of Daily. “He’s the kind of guy you want to be when you get older.”

Daily grew avocados and citrus on his De Luz property. He had been a member of the San Diego County Farm Bureau since 1985, although he did not serve as an officer or board member.

Daily’s community involvement didn’t prevent him from social meetings with neighbors and friends. “ a lot of good conversations with the man,” Metzger said.

Metzger noted that Daily and the neighbors often got together when floods and fires threatened the community. “He was a very, very good man. There’s no doubt about it. He was an excellent guy,” she said.

Metzger was the founder of the De Luz Citizens Committee, of which Daily was a member. “He’s going to be sorely missed,” she said.

He spent numerous meals during his final years with friends. “He still had a good life,” Joan Rose said. “People were just so nice to him.”

In addition to his daughters, two brothers and two sisters, Daily is also survived by six grandchildren and six great-grandchildren.

“North County has lost one of its finest citizens and my deepest sympathies are with his family,” Horn said.

Funeral services for Daily will be held August 15 at the United Methodist Church in Fallbrook and will begin at 11 a.m.

In lieu of flowers, the family requests that donations be made to the De Luz Volunteer Fire Department or to Fallbrook Hospice.