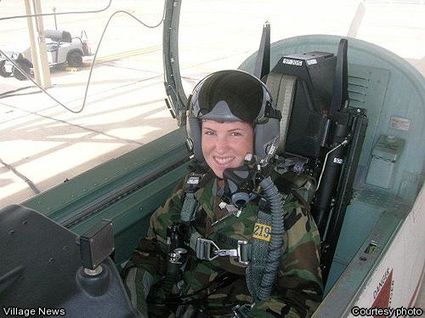 Air Force ROTC student Keely Yankie is all ready for a ride in a T-6.

Keely Yankie, who attended Zion Lutheran School, then Fallbrook High for four years, is now a student at Purdue University in the ROTC program. Her major is aeronautical engineering and after graduation she will be commissioned as an Air Force Second Lieutenant. Her career goal is to become a pilot and she has already been a passenger in a T-6, which is a trainer for the F-16. “It was an amazing experience,” she noted. Keely said that she has always loved the military and was very patriotic while growing up.

During her summer break Keely served a six-week mission in Venezuela with Campus Crusade for Christ. She recently spoke at her church, St. John’s Anglican, about her adventures. This was her first mission trip and she decided to go because she wanted to “do something I’ve never done before and tell people about Christ who have never heard.”

Her base was a town called Valencia, where she lived in an unfurnished apartment with just a bed and a plastic chair in her room. The food also took a bit of getting used to because it was a diet which consisted largely of fried foods. “They eat a lot of hamburgers and hot dogs,” she mentioned. However, the bright spot in the day’s meals was the fresh fruit – mangos, papayas, guavas – which were purchased from open-air markets. One traditional Venezuelan food that Keely enjoyed was called an “Arepa.” This is a type of sandwich made from cornmeal bread, which is usually fried and then filled with shredded beef or chicken.

Keely said it was hot and humid most of the time – 90 degrees with about 70 percent humidity. From Monday through Thursday she spent time at the University of Carabobo in Valencia, where she helped students set up an English club where they could practice their English skills. According to Keely, the students loved Americans and were very excited to show off their homes. Keely was frequently a dinner guest at the various homes of her new friends.

On campus there were some violence issues with many students protesting because they felt the need for more security guards on campus. However, Keely felt safe on the campus and also in Valencia, where she would sometimes walk alone.

On weekends her Campus Crusade team would conduct outreaches to the students through the hosting of soccer games. During the six weeks she was in Venezuela, her team of eleven students and five staff members shared the message of Christ’s resurrection and saving power to many people. Keely was encouraged when, at the end of six weeks, she saw 65 people take the message to heart and pledge to follow Christ. She was also very encouraged when two of the translators who had accompanied them for six weeks, and who were professing anti-Christian sentiments, both decided to follow the teachings of Jesus Christ and entrust their lives to Him.

Keely discovered that relationships are of the utmost importance to the people of Valencia and she mentioned that everyone was open to hearing the message of Christ. “No one turned us away,” she commented. She is now dedicated to keeping in contact with some of the new friends she met during her time there. 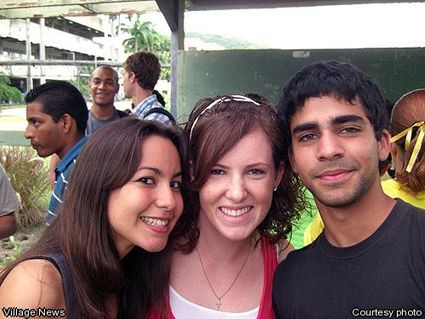 Keely Yankie (center) now has friends at the University of Carabobo in Valencia, Venezuela, where she visited with a Campus Crusade for Christ team.

After six weeks away from the United States Keely was amazed at the choices and overwhelmed at the mass quantities we have of the same items, especially in stores like Costco and Wal-Mart.