Have a cook-pot full of fun 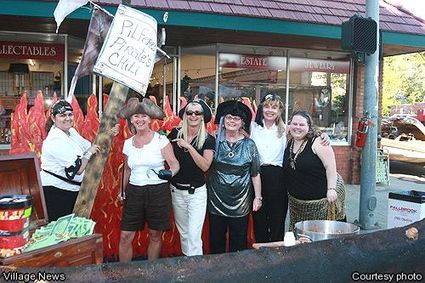 Michelle Howard and her crew placed first in 2006 with

Entering a chili contest is a cook-pot full of work but a cook-pot full of fun as well. I am qualified to make that statement because the one and only chili contest I entered was a lot of work, a lot more fun, and I actually took home the gold plastic loving cup. Held in Salt Lake City, the contest had three divisions: Hot, Medium and Mild. I took first in the Medium Division, which was nicknamed “Almost Chili,” implying that if it isn’t raging hot, it isn’t really chili. I used a recipe I found in my Grandma Bristol’s cookbook and threw in a few extra ingredients. The mix simmered all night and the long cook time seemed to enhance the flavor.

I retired as a winner and decided to write stories about chili contests instead. So, for six years now I have been fortunate to cover Fallbrook Connection’s Chili Contest, held during Hot Summer Nites.

Over the years I have tasted some very interesting chili recipes. Do you have a chili recipe that has been passed down through generations? Or a new and edgy recipe just developed last week? Whatever your take on chili is you can be assured that it will be welcome at the contest.

This year the Chili Contest will be held at the final Hot Summer Nites event Friday evening, August 29, from 5 to 8 p.m. on Main in downtown Fallbrook. The contestants are required to provide six gallons of chili, prepared and delivered hot and ready to serve. Participants must have the use of a kitchen approved by the local Department of Environmental Health. However, the Fallbrook Connections Networking Group will help contestants meet the guidelines.

As in years past, attendees will be able to purchase tickets in order to sample the various chili concoctions and then cast a vote for their favorite.

In 2006 the Village News’ own Michele Howard placed first in the Amateur Division with her “Pilfered Pirate’s Chili.” She worked hard for a week to create a three-dimensional pirate ship complete with tattered sheet sails and oatmeal box cannons. Crunched-up newspaper was painted to look like water and the ship looked as if it was sailing down Main. For her efforts, Michele was honored with the Best Booth Presentation award. However, an attractive booth doesn’t mean that you will win the chili contest. Your booth can be quite simple; the chili is judged on its own merits. Michele’s flavorful chili had the right amount of spice and wasn’t too hot or too mild.

In the past, the chili cooks have used several unique ingredients such as chocolate or beer.

In 2006 Mike Murray made his special Elk Chili with elk meat he brought from New Mexico. That same year a couple named the Brattons used their own homegrown vegetables and peppers to flavor their chili.

There are also unusual motivations for entry into the contest. Some of the chili cooks find that a booth at the chili contest provides a good venue for advertising their business.

“This is a great avenue to promote their own organizations while having fun,” said Jane Wilson, a contest organizer.

One of the most unique motivations was in 2007 when twenty-one-year-old Chris Coleman entered his delicious “High Five” chili created in honor of his father, Ron, who died of cancer.

Last year, it seemed as if the traditional recipes swept the awards. Cook Tracy Lathrop was on the right track with the “Summer Savory Chili” she made for the Rainbow Valley Grange. As the first place winner in the Amateur Division she used a traditional recipe – medium spiced and made with ground beef and beans.

First place in the People’s Choice Division was “Chez’z Country Chili” by Ron Chesney; filled with beans, beef and onions, it also had a delicious chocolate flavor. He had been cooking since he was ten years old in his parents’ barbeque restaurant in Kansas City. Chesney’s booth was also quite outstanding and looked like something out of the Old West with signs like “Ozark, Missouri 1,646 miles.”

An elaborate booth is part of the fun, but not essential, because the chili is judged by a blind taste test.

So, dig out your favorite recipe and get cooking. Promote your business, craft, art or nonprofit organization. Or, do it just for fun!