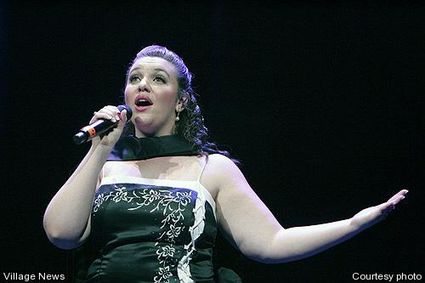 LAS VEGAS — On July 10 at 8 p.m., Stephanie Fry, a 2004 graduate of Fallbrook High School, took center stage at the Coliseum at Caesar’s Palace Las Vegas. Her rich lyric soprano voice sang “Think of Me” from Andrew Lloyd Weber’s “Phantom of the Opera.”

“To be able to perform on the same stage as Elton John, Cher, Bette Midler and Celine Dion was a really wonderful experience!” said Fry. More than 1,000 people filled the audience for the biannual Harrah’s Las Vegas Employee Talent Show.

More than 100 contestants auditioned for Harrah’s own version of “Harrah’s Got Talent” and only nine were selected to perform in the finals held at Caesar’s Palace. Acts ranged from rap to opera. The five judges were local celebrities from Las Vegas, including a record producer, a radio personality and magician Nathan Burton. The grand prize was $2,500 and three days at Harrah’s Lake Tahoe.

Since her graduation in 2004, Fry has been very busy. She attended two years at MiraCosta College and then transferred to University of Nevada Las Vegas to major in hotel management at the William H. Harrah School of Hotel Management. Fry started working for the Harrah’s Corporation in 2005 as a waitress at Harrah’s Rincon.

She then transferred to Harrah’s Las Vegas, where she started working at the front desk. She was then promoted to room inventory management, then to VIP services. She is now working in customer satisfaction for all seven Harrah’s properties in Las Vegas. Going to school full-time and working full-time keeps her too busy to spend much time with her music, so the talent show was a wonderful chance to get back onstage.

Fry started performing at the Mission Theater at the age of 8 and participated in more than 40 shows in her theatrical career in Fallbrook. She was also involved in choir in both high school and at MiraCosta. Fry studied voice privately with Susan Lutz for eight years locally and now studies with Dr. Madeline Cappella in Las Vegas.