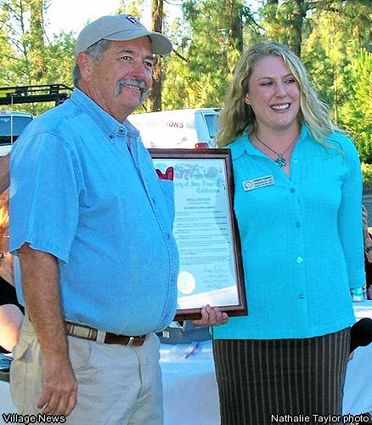 The dinner was prepared by the Fallbrook Hospital staff headed up by Stephen Spencer, who has been food service manager for ten years. According to Spencer, the hospital offers a restaurant-style menu for patients and also does quite a bit of in-house catering.

The food served was excellent and of a caliber that would be found at a fine restaurant. The main course was delicious lamb served with mint sauce. Other dishes included caramelized brie, curry spinach salad, fresh shrimp and a taco with pulled pork and fresh cilantro.

Outgoing Honorary Mayor John Harris was given a proclamation read by Christi Knight, community representative for Supervisor Bill Horn’s office. The proclamation, which was from the San Diego County Board of Supervisors, read, “Whereas the County of San Diego is committed to recognizing and honoring those individuals who are dedicated to the best ideals of public service, and John Harris is one such worthy citizen, so be it proclaimed by Chairman Greg Cox and all of the members of the San Diego County Board of Supervisors on this 20th day of August, 2008 that they commend John Harris for his outstanding service, leadership and commitment to the area residents and do hereby declare this day to be ‘John Harris Day’ throughout San Diego County.”

Harris commented, “It has been a very fun year representing the community at all the events around town and on Camp Pendleton – it is fun to be a part of the community.” He said that he made an effort to attend every event that he could.

Harris’ wife Ruthie served as honorary mayor in 2005, the same year that daughter Chelsey Corcoran won first runner-up in the Miss Fallbrook pageant and served as a Miss Fallbrook Princess.

The Harris family are the owners of Sourdough Pizza and Italian Restaurant in Fallbrook. Last year during the Rice Canyon Fire, they served the community in a commendable manner by providing pizza to the Sheriff’s Department and other workers. On the first day of the fire they served pizza to 300 people.

Rebecca Waranch, Stan Nieman and Mike Mroz were this year’s candidates for Fallbrook Honorary Mayor. A total of $14,160 was raised by all three candidates. The title of 2008 Honorary Mayor was granted to Waranch, who earned approximately $8,000. Surrounded by a throng of well-wishers, she was obviously thrilled about her victory. 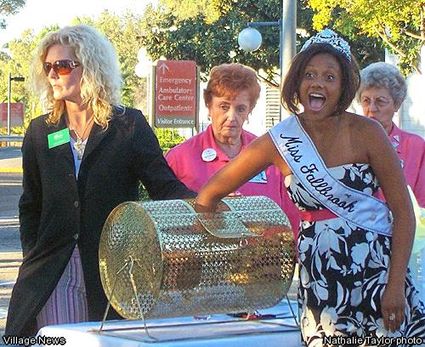 This is her first time to run for mayor. She is a member of the Fallbrook Connections Networking Group and a senior consultant for Tastefully Simple, a company that offers prepackaged and easy-to-prepare gourmet foods that are sold primarily through home parties.

Waranch participated in the Hot Summer Nites Chili Contest last year and took third in the Professional Division for her “Wahoo Chili.” She used her own recipe which called for Tastefully Simple spices.

Waranch is “truly excited” about her position as mayor and commented, “I am serious about representing the community and plan to fully participate in the Chamber, hoping to attract new members and help to promote local businesses and charities.”