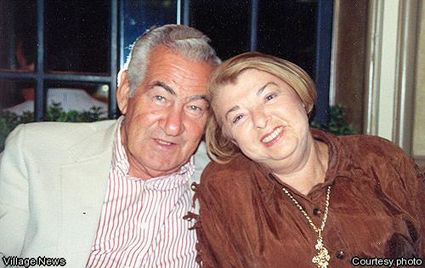 Daniel and Natalia were born in Poland in the 1920s and were Holocaust survivors. They were married immediately after liberation by Russian troops in August 1944. But because they were under Soviet rule, they could only have a civil ceremony, and vowed that on their 25th anniversary they would have a full Jewish wedding. In August 1946 Daniel and Natalia crossed the Polish-Czech border on foot, escaping the Soviet Union, living as displaced persons in Stuttgart, Germany, while building new lives.

In 1949, after completing a university degree, the family, which now included their daughter Anna, immigrated to the United States. Daniel worked in technical capacities for RCA and Lockheed while they lived in New Jersey and Tucson before finally settling in the San Francisco Bay Area in what was to become Silicon Valley.

Daniel was the inventor of the modern-day fax machine, having developed patents that constituted pioneering commercial applications of digitization, a technology which has since revolutionized the world of electronics. He was also one of Silicon Valley’s veteran entrepreneurs at a time when Santa Clara County was still better known for its fruit orchards. Founding the company Dacom in 1966, he and his partner developed the first digital fax machine that could transmit pages over standard telephone lines in less than one minute.

Business was not always good and their 25th wedding anniversary came at a time when money was scarce, so Daniel and Natalia vowed to hold their Jewish wedding on their 50th anniversary.

After Dacom, Daniel channeled his entrepreneurial spirit into the nascent Venture Capital industry, founding San Jose Capital in the mid-1970s.

Natalia was a quiet leader and devoted partner to her husband and children. Her love and devotion as wife and mother fueled Daniel and her children in all their endeavors. She was a muse, both inspiring accomplishments and celebrating their realization. She was advisor, confidante, supporter, promoter and hostess who had an uncanny sense of intuition, especially regarding her family, and an impeccable sense of style.

As a mother and grandmother, she was an eternal source of love, warmth, humor, selfless generosity and fortitude. Natalia also had an active mind, studying psychology and philosophy at San Jose State.

As anyone who ever attended one of the Hochman dinners knows, entertaining was Natalia’s passion. She enhanced her natural talent by taking hotel and restaurant management classes at the local college. Natalia’s skills as a hostess were a true reflection of the joy she derived from giving, feeding and nurturing her friends, family and pleasantly-plump pets.

The oppression she suffered under Hitler made Natalia empathetic to the injustice done to others and she was active early on in the Civil Rights movement, hosting the first civil rights meeting in her affluent suburban community and bearing up under the ensuing controversy.

Some 20 years ago Daniel retired and they moved to in the San Diego area, first in Poway and later Carlsbad.

In 1994 they celebrated their 50th wedding anniversary with a lavish Jewish wedding ceremony in San Diego with friends and family flying in from all over the world to attend.

Four years ago Jon and Anna Monday moved to Fallbrook from Northern California to be closer as Anna’s parents’ health had started failing. The last year was progressively worse for Daniel and Natalia spent countless nights in the hospital by his side, taking a toll on her health.

In the last days at the hospital, in the last hours of Dan’s consciousness, they were in separate rooms and both asked to see each other. Anna wheeled Natalia into Dan’s room. Dan lit up with a big smile and said to her, “You look as beautiful as ever.” They were in deep love to the end.

At the skilled nursing facility under hospice care Dan almost immediately went unconscious. Granddaughter Rachel, her husband Will and great-granddaughter Beatrix came the next day and had a great visit with Natalia; everyone was very happy that she was able to see her great-granddaughter, but the next day things turned for the worse. Natalia was lapsing in and out of consciousness. When she came to, she would ask Anna how Daniel was and Anna would reply he was very ill.

Then, for the last time, Natalia again asked how Dan was; Anna replied that he had passed away. Natalia’s head fell back and she never really again regained consciousness. Anna said it was as if a light went off.

After three days of labored breathing, Natalia quietly slipped away. Anna, June and Jerome had taken turns to be with her continuously, except for the short time for the burial service for Dan.

Natalia passed away just three days after Daniel. They were linked in a deep spiritual sense, beyond being married for 64 years.

Their marriage and family life was a beautiful combination of their individual talents and deep feelings for family. They both showed strength and grace during times of adversity and generosity during the prosperous times.