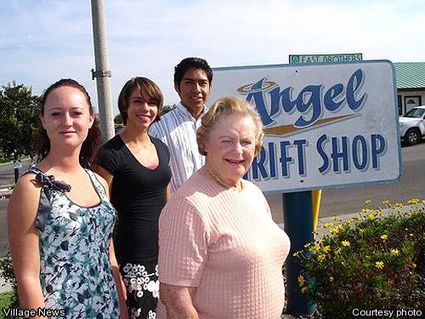 Marilyn Miller and Billie Foli met with Jessica Foos, Jose Melo and Leslie Grantham to congratulate them and give them a tour of the Angel Thrift Shop, where sales generate the funds for these scholarships.

Foos and her mother expressed gratitude for the help this will provide as she enters California State University, Fullerton. This is not the first experience the family has had with the Angel Society. A poem written by Foos’ younger sister was read in the dedication ceremony when the Angels first occupied this location in 2000.

Melo said his first knowledge of the Angel Society was when they supported Mentoring Associates in Valley Oaks Home Park, where he started while attending elementary school. He continued in this program as a mentor to other students during his high school years and has served as a role model, graduating with honors. Melo is now enrolled at California State University, San Marcos and works part-time.

Grantham expressed excitement as she was preparing to leave for University of Southern California to be a part of the Navy ROTC and prepare for a career in aerospace engineering.

Erica Salinas, in a phone interview, said that she had already commenced classes at University of California, San Diego but wanted to thank the Angels for their generosity. “The inspiration I received in the AVID program and the encouragement and support of my family helped me achieve my goals and qualify for this scholarship,” she said. “I would like to contribute to society by helping others, hopefully in the field of medicine.”

Becca Donlon is enrolled at San Francisco State University. When asked why she chose that school she replied, “Because it offers a degree in visual and communication design. This has been my interest since I started designing and decorating my own room. I thank the Angels for the help they have given me with this scholarship.”

The Angel Shop is owned and operated by the members of the Angel Society, a nonprofit organization, and is located at 1002 South Main Avenue. It is open from 10 a.m. to 3 p.m. Monday through Saturday.