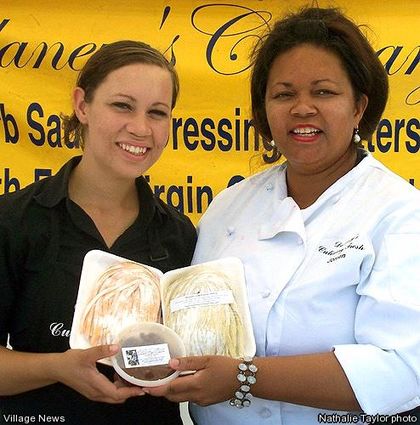 Jordan Stone (right) and her daughter Carlie own Delaney

If you drive by Bonsall Elementary School on a Sunday between the hours of 10 a.m. and 2 p.m. you will see some colorful tents set up at the parking lot. What is happening is the hustle and bustle of the newly formed Bonsall Farmer’s Market, which features approximately 37 vendors. Most of the vendors are from the Fallbrook/Bonsall/Rainbow/De Luz area, but there are also vendors from Vista, San Diego, Temecula and as far away as Lake Elsinore. Some of the funds raised from the weekly event will benefit the school’s classroom programs and services.

“About half of the vendors are farmers,” said Daniel Costa, executive director of the Bonsall Education Foundation. Costa was pleased with the inaugural market, which took place Sunday, September 5. “We were blown away; there were two thousand people in attendance!” He also mentioned that they were happy to see return customers this week.

Also with the Bonsall Education Foundation is Darlene McCabe, who commented, “This has been a huge success. There is a true sense of community.”

Teresa Fiske, who sells organic avocados herself and was shopping at Sage Mountain Farms (of Aguanga), said, “I love that they have the fresh organic vegetables.” Sage offers vegetables grown using well water and healthful organic processes.

“I was really impressed that [the farmer’s market] was tied to the school system,” said vendor Mary McBride of Vista, who sells herbs and flowers. “These people worked hard to put this all together. I’m definitely a fan!”

Lake Elsinore is a long haul, but that is how far Dave Heafner and Leslie Pesic of Da-Le Ranch come to sell quality meats. They raise hormone-free rabbits and swine. They also sell hormone-free meat from NTM Livestock, owned by Megan McDowell. McDowell raises lamb, beef and goats. On Sunday Dave had his grill going to prepare tasty samples for the shoppers.

Variegated basil and other herbs are sold by Tom Piergrossi, who owns Tom Piergrossi Landscape and Nursery in Vista. He enjoys growing fresh herbs and is convinced that the public is “going back to what it was like thirty years ago and is interested in what is put on their food.”

Beautiful flowers are the focus of Job and Rachel Sandoval’s booth. Their prices are reasonable and the flowers are fresh. For three dollars I found a small bouquet with one large rose, white and yellow chrysanthemums and baby’s breath. Rachel said that the bouquets may vary depending on the flowers in bloom at their ranch.

CLM Nursery of Fallbrook is the enterprise of Chris Miller and his mother, Phyllis. Chris is a 2004 graduate of Fallbrook High School and gives credit to Ag Department instructors George Kreutz, Doug Sehnert and Margaret Chapman for giving him the solid foundation on which to build his business. He sells tropical trees including palms, sego palms and jacarandas, among others. In November he will begin to sell poinsettias. Chris began his nursery while a freshman in high school and now grows his plants on two acres of land. His jacarandas were started as seedlings at Fallbrook High and the trees he now sells were started from the same trees.

Kathy Lambert of Fallbrook’s Rancho Borrego Negro was spinning wool shorn from her own sheep. She raises sheep, llamas and angora goats for their wool and sells a variety at her market booth. Come by and watch her spin the wool!

Tasty hot dogs for only a dollar are a great buy at Marty and Amy’s booth. You can’t miss it. They are the ones wearing giant hot dogs on their heads! By the way, the hot dogs are good and are enhanced by special Italian onions. They are skipping a week but will be back on September 28.

A booth run by Tara Boyce Crivello of the Fallbrook Yoga Center features herbs from the Amazon Herb Company. Ten percent of all purchases from this company go toward the preservation of the Amazon Rainforest. Tara also sells yoga-related items such as a fascinating candle holder formed from a mineral found in a cave. Chocolates from local chocolatier Mariella Balbi are also sold at this booth.

Homemade pastas and sauces are the specialty of Delaney’s Artisan Foods owned by Jordan Stone with help from daughter Carlie. There are many from which to choose. Jordan’s “Fromage Fantastico” appetizer is delicious with Asiago, Romano and Provolone cheeses, garlic and a variety of herbs. Also a winner is her “Artichoke Sauce” with Roma tomatoes, marinated herbs, cream and various spices. Jordan and Carlie make all of their pastas by hand and they are easy to cook – just three minutes and they are done! The business is headquartered in Temecula.

The Winchester Cheese Company specializes in Gouda. They own a herd of Holstein cows and their cheese is made at their own Wesselink Dairy in Winchester. The cheese is made in the traditional Dutch fashion using recipes brought from Holland by Jules Wesselink, the company’s founder. Now, Valerie and David Thomas make the cheeses by hand. They offer the traditional smoked Gouda as well as the spicy Jalapeño Gouda and flavorful Cumin Gouda. Having lived in Holland for a time I became a fan of Gouda and I can say that Winchester’s cheeses are very tasty, or “lekker,” as the Dutch would say. 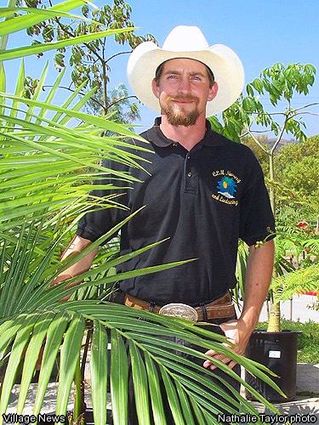 Chris Miller, along with his mother, Phyllis, own CLM Nursery of Fallbrook. They sell tropicals at the Bonsall Farmer