'Noises Off' stumbles into Mission Theater 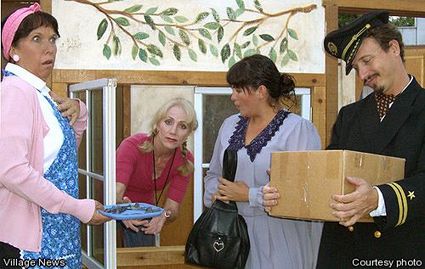 Fallbrook Players (from left) Susan Korean, Cari Garrison, Andrea Verdin and Jake Lamont take the stage for a performance of

FALLBROOK — Area theatergoers are in for a real treat when the adult division of Fallbrook Players takes to the stage at the Mission Theater September 26-October 5.

After a many-year hiatus, nine area actors will be performing the hilarious Broadway farce “Noises Off,” which was also made into a movie starring Carol Burnett, Christopher Reeve and John Ritter, among others.

With breakneck pace and a rich gallery of characters, Michael Frayn’s brilliantly witty farce follows the on- and off-stage antics of a touring company as they stumble from dress rehearsal to disastrous last nig...