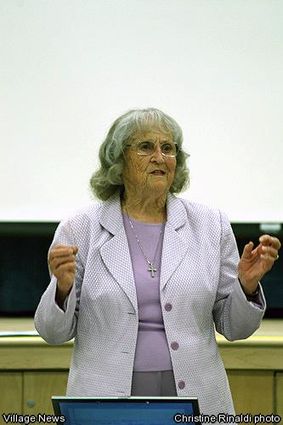 Sylvia Tucker, EdD, clerk of the Board of Trustees of the Bonsall Union School District, speaks to the crowd at the September 12 dedication of the new Bonsall Elementary School.

After 18 months of construction and a few delays, the new $26 million Bonsall Elementary School was officially dedicated on September 12 as a functioning part of the Bonsall Union School District (BUSD).

The district’s Board of Education was present at the special dedication program, and Dr. Sylvia Tucker, clerk of the board, congratulated the district administration, saying they “deserved a celebration” for all the work and effort that had been put in to complete the elementary school and put classes in order for the 2008-2009 school year.

According to BUSD Superintendent Dr. Justi...