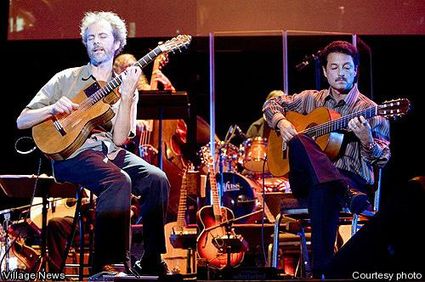 Peter Sprague (left) and Fred Benedetto will perform a concert, as part of the Fallbrook Americana Music Series, on October 11 at Mission Theater.

FALLBROOK — Peter Sprague himself sums up what will happen on Saturday, October 11, at 7:30 p.m. at the Mission Theater: “Maestro [Fred] Benedetti and I explore the world of sounds living inside the guitar.”

It can’t be said any better than that. Sprague and Benedetti are two of San Diego’s finest musicians, part of a cadre that brings nationwide acclaim to the area.

Sprague is known on two fronts: as a very busy performer with his highly individual improvisation style on guitar and as a producer at his recording studio, Spragueland in Del Mar. He actually has a third identity, very Southern California, very San Diego: devoted surfer.

Benedetti is a professor of music at Grossmont College, where he has received numerous awards as an outstanding instructor. He, too, keeps up a busy performing schedule, doing classical and jazz with various combos in the US and Europe, including august gigs with San Diego Symphony and San Diego Opera Co.

This concert is sponsored by Fallbrook Americana Music Series, now in its eighth year. Tickets are sold at the Mission Theater, 231 North Main, and at the door. Call (760) 723-7255 for more information.