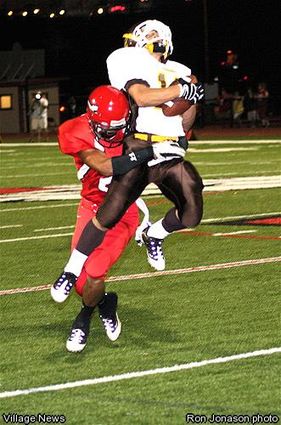 Fallbrook Warriors wide receiver Jeff Hecht gets both hands on an El Camino opponent to take him down.

On September 26, the Fallbrook varsity football team played the El Camino Wildcats. The injury-plagued Warriors competed without Aaron Atkins, who was injured during the previous week’s game, and Jacob “Jake” Robinson, who was injured in a car accident a few days ago.

The Warrior offense played remarkably en route to a 24-0 win over the Wildcats.

The game began with Fallbrook receiving the ball. The Warrior offense was stopped and El Camino forced Fallbrook to punt. Brady Harrington’s kick was muffed and the Warriors recovered the ball on the Wildcats’ 21 yard-line. This led to a touchdown pass from quarterback Michael Welsh to Chris Allen. At the end of the first quarter, Fallbrook led 6-0.

El Camino’s first possession of the second quarter ended with a punt. Later, the Wildcat defense held the Warriors to a fourth-and-one situation. Fallbrook decided to go for the conversion and running back Mitchell Salazar dashed 29 yards into the end zone.

The Warriors’ next possession resulted in a turnover. However, Marquis Sumpter intercepted the ball to give the Warrior offense a second chance. After a huge gain by Salazar, Fallbrook missed a field goal and headed into halftime with a 12-0 lead over the Wildcats.

The Warriors continued their onslaught in the third quarter. El Camino’s next three drives were held to a punt, turnover on downs and yet another punt. This set up a 77-yard strike through the air from Michael Welsh to Marquis Sumpter. A nearly speechless Welsh described the moment as “incredible.” 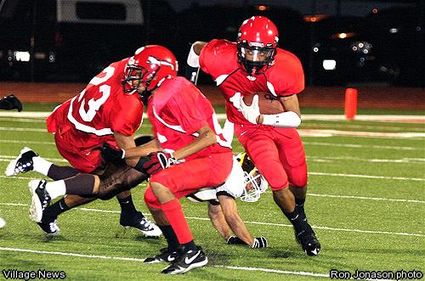 With the help of two Warrior teammates, Marquis Sumpter runs the ball down the field.

Entering the fourth quarter, Fallbrook led El Camino 18-0, but not for long. The Warriors extended their lead a minute into the period with a seven-yard touchdown run by Mitchell Salazar. He ended the game with 183 yards and two touchdowns. The Warrior defense continued to shut out the Wildcats, as it led to a 24-0 victory.

The Warriors had won their first game of the season. The victory was also Joe Silvey’s first win as Fallbrook’s head coach.

“I’m more excited for the kids,” said Silvey. “For them to get the first win of the season amongst all the difficulties, particularly this week, I am really happy for them.”

Fallbrook’s next game will be against Rancho Buena Vista on October 10.