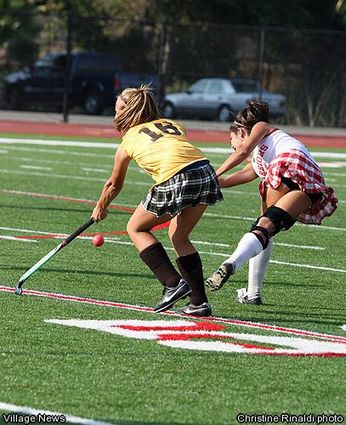 On September 30, the Fallbrook High School girls’ field hockey team played the Serra Conquistadors. Both teams’ offenses executed well throughout the game, making the contest a shootout. The high-scoring match ended with the Lady Warriors as the victors.

Fallbrook came out aggressively at the start of the game. They carefully controlled the ball and showed composure on the offensive side. This resulted in a goal by Lydia Brambila with an assist from Kyle Little.

The Warriors continued to be patient as Jesse Fox tacked on another goal to give Fallbrook a 2-0 lead. Little also assisted the second goal.

With a minute left in the first half, the Conquistadors scored their first goal, trimming the Warrior lead to 2-1.

The halftime allowed Serra to regroup and they came out with a sense of redemption in the second half. The sudden burst of intensity forced the Warriors to take a timeout.

The intermission broke up Serra’s effort to tie the game. Instead, Brambila scored her second goal of the contest with an assist from Lauren Hughey. It was Brambila’s first game with multiple scores.

The Conquistadors seemingly refused to lose as they scored with 10 minutes left in regulation time, leaving them down by only a goal.

Serra continued their hopes for a comeback as they kept attacking and acquiring penalty corners. However, the Warriors’ defense parried the flurry of shots and stole the ball constantly. 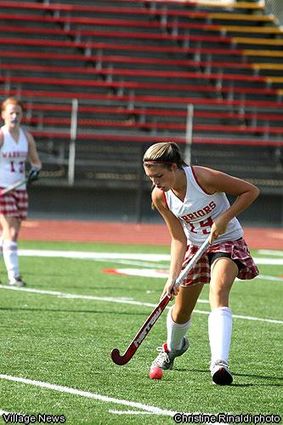 Lady Warrior Hana Smith gets in position to make a pass.

With under a minute left in the game, Serra obtained a late penalty corner with a chance to tie. However, defender Lizzy Eskue swiped away Serra’s final opportunity to win. The final score was 3-2.

“We stayed tight on the ball and played really aggressively today,” said Eskue.

Later, Fallbrook coach Kathy Waite added, “It was great to see a high-scoring game and for them to finish it.”