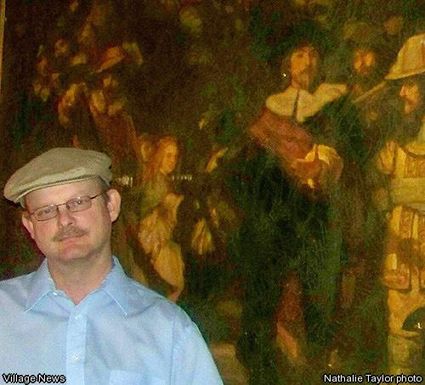 Robert Penkava, owner of Le Bistro, is proud of his 350-year-old

Sequestered in the leafy Jackson Square Courtyard is Le Bistro, an elegant European-inspired café that has been delighting patrons for twenty-three years. In the evening when the courtyard lights twinkle, proprietor and Chef Robert Penkava creates a varied culinary repertoire with careful attention to each essential element.

It is no surprise that he honed his innate culinary inclination while living in Heidelberg, Germany. Having lived in Europe at one time myself, close to the captivating cafés of Brugge, Belgium, the charm of Le Bistro is a tonic for the yearning I feel for this savory and significant arm of European culture.

Subtle classical music enhances the soft ambiance of the restaurant and the air is tinged with faint mélange of European culinary scents. The menu is replete with Continental-inspired fare bearing tantalizing titles such as Escargot Burgundy, Lobster Crepes and Beef Chateaubriand.

I enjoyed the Roast Stuffed Lamb, which is lavish with an exquisite burgundy mint sauce. Tender and lean lamb slices are rolled with finely chopped mild onion, parsley and a hint of garlic. One bite of this extraordinary entrée and I was whisked off to Brugge.

“Robert’s Ice Cream” is only one of Le Bistro’s several delicious desserts. Ardent admirers will be interested to learn that this creamy marvel is now also served in a small portion dubbed the “Bobbette.” This dessert is Chef Robert’s creation hand-mixed with vanilla ice cream, Ghirardelli chocolate shavings, finely chopped walnuts and just enough brandy to be the catalyst for a marvelous flavor.

The dining salon exudes a classical flair with antiques and oil paintings. The crackling but enchanting 350-year-old replica of Rembrandt van Rijn’s “Nightwatch” is a blend of both. An art appraiser’s verdict was that the canvas was probably painted by a protégé of the Dutch master, who lived from 1606 to 1669.

Le Bistro is a window to a world where charming ambiance is reminiscent of a European café and the inspired cuisine definitely encourages lingering. 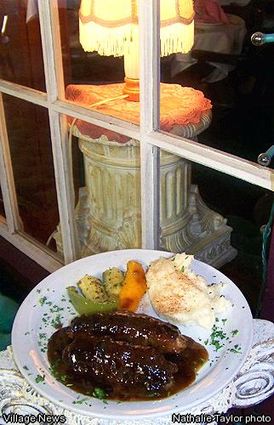 Roast Stuffed Lamb is one of Le Bistro