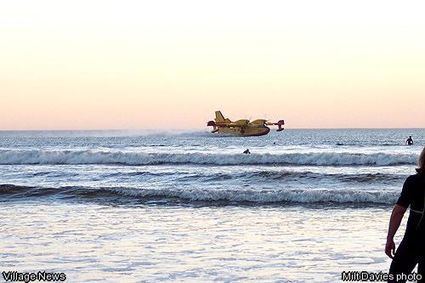 The Canadian Superscooper planes saved the day when they continued to pick up water out of the ocean off Oceanside and dump it on the Juliet Fire on Camp Pendleton last week.

NORTH COUNTY — With the one-year anniversary of last year’s October wildfires approaching, North County residents looked to the horizon last week and saw what they knew was only a matter of time: another large wildfire.

This one was on the southwest corner of Camp Pendleton, about a mile from homes, and sent thick smoke in the sky. However, unlike last year, new aerial resources in the form of two leased Canadian CL-415 Superscoopers on 24-hour/seven-day standby were in the air immediately over the fire.

With other air resources and an effective ground attack, a 1,000-acre fire was surrounded and put out without any loss of life or property. 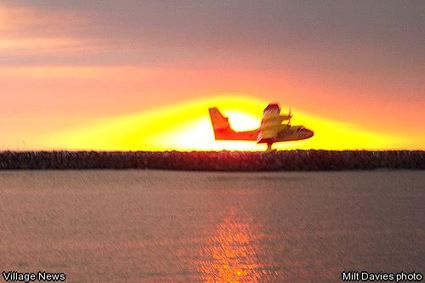 The Superscoopers were picking up water near local surfers off the coast of Oceanside. The planes

Fifth District Supervisor Bill Horn said, “The tremendous work of the Canadian crews and their Superscooper aircraft that took water from the ocean is exactly what we hoped for in upgrading our firefighting arsenal. We have just entered a critical 90-day period of leased firefighting services that traditionally is during the most dangerous part of the year when it comes to wildfires.”

The successful attack on the Camp Pendleton fire was a combined effort of four strike teams of five brush engines from Camp Pendleton, coastal and inland North County fire departments, the California Department of Forestry and Fire Protection and the County of San Diego.

“I look at our Superscoopers as a continuation of the county’s commitment to public safety,” said Horn. “While my hope is that we will be spared from future fires, we know there will be more and that’s why we are prepared and saw the result of our preparation this week.”