'Boldly go' to 'Star Trek: The Exhibition' and be 'beamed up!' 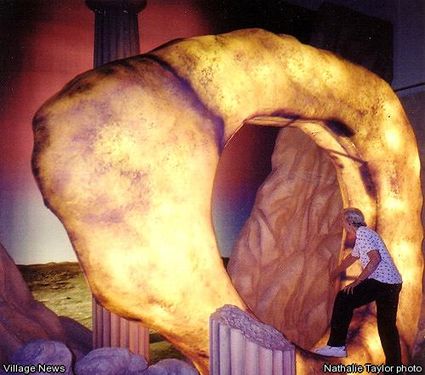 A time portal recreated from the

“Space: the final frontier. These are the voyages of the Starship Enterprise…” My bet is that most readers will be able to complete this sentence since the original “Star Trek” series, created by Gene Roddenberry, has been called the most popular television show in history and has inspired conventions, a new language (Klingon) and even technological inventions.

Trekkies, Trekkers and anyone who has seen the shows or films will enjoy “Star Trek: The Exhibition” at the San Diego Air and Space Museum in Balboa Park. For about three hours I was “beamed” back into the fascinating (as Mr. Spock would say) world of all things Star Trek.

Open through January 19, the exhibit is 12,500 square feet of Star Trek set recreations, props, ship models and even flight simulators where visitors can experience some first-class space turbulence.

A replica of the USS Enterprise bridge includes nameplates so visitors can sit where their favorite characters experienced a galaxy full of adventures. My father sat in Captain Kirk’s chair, which they say was used on the set, while I became Lieutenant Uhura. With a little imagination, the whistles and noises of the ship’s bridge could transport you to the ’60s television set.

Visitors can also see on a projected screen what it looks like to be “beamed” as they position themselves in the center of the Enterprise’s Transporter Room replica.

A mockup of Captain Jean-Luc Picard’s (portrayed by Patrick Stewart) onboard suite from “Star Trek: The Next Generation” is complete with stars twinkling through elongated portholes.

Models of various starships are on display along with a tricorder, hand phaser, communicator and the furry tribbles from the delightful “Trouble with Tribbles” episode written by David Gerrold. Tribbles were prolific furry creatures that purred when around humans but screeched when they came near a Klingon.

At the time portal called “Guardian of Forever,” from the episode “City on the Edge of Forever” written by Harlan Ellison, visitors can use their imagination and step through to another world. In this episode Captain Kirk saves the earth and the Enterprise from destruction through a trip back in time. This expertly written episode is my favorite and contains a complex story encased in an hour-long capsule.

Several of the series episodes as well as all of the films are highlighted with photographs and bits of information, including the outstanding episode “The Cloud Minders” written by Margaret Armen, who was a friend of our family. Armen highlights the age-old issue of people who live and work in unsatisfactory conditions versus the elite who sometimes reap the benefits of the workers but know nothing of the workers’ world.

Framed and sitting in a place of honor on my bookcase is a sheet of hotel notepaper boldly penned with the phrase “Live Long and Prosper! -- DeForest Kelly.” Kelly, who played the role of Dr. Leonard McCoy, was a kindly character both on and off the screen. A poignant moment for me was when I saw Dr. McCoy’s blue medical officer’s uniform standing tall on a glass encased mannequin.

However, what I will probably remember most is the short-sleeved blue uniform of Dr. McCoy. DeForest Kelly, this kindly man who wanted me to “Live Long and Prosper,” would probably be pleased that almost ten years after his death I was able to view his costume from the television show that coined this now-universal Vulcan blessing. 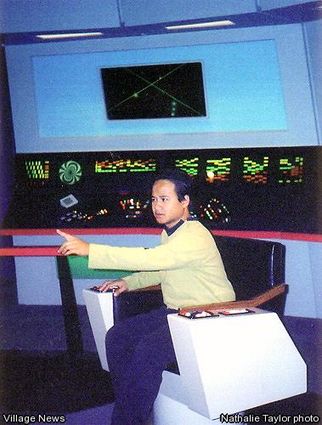 Jonathan Corpuz poses as Captain Kirk on the bridge of the Starship Enterprise.