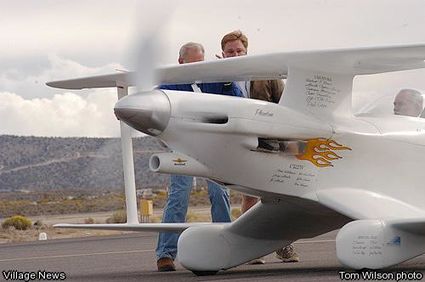 Pilot Tom Aberle (right) waits for the green flag at the starting line while his crew, including oldest son Jerry Aberle and propeller designer Paul Lipps (left), holds his airplane in place until two minutes before the start of the race.

Tom Aberle won the Sport Biplane class at the National Championship Air Races in Reno, Nevada, while breaking his own speed record for the division.

In 2007 Aberle set a qualifying record with an average speed of 251.573 mph and was leading the first heat race before a melted piston on the second lap forced Aber...