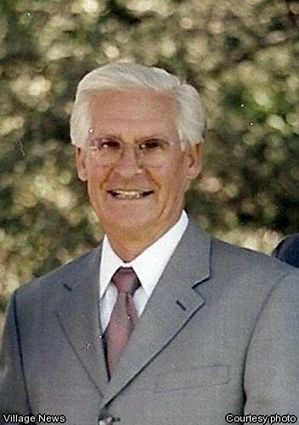 John M. Ivelich was born August 15, 1930, in Watsonville, CA, and passed away peacefully on October 26, 2008, at his home in Fallbrook in the company of his wife and family members. All who knew him will miss his goodhearted, energetic, fun-loving nature and warm smile.

Following graduation from Watsonville High School, John enlisted in the Navy in 1948. After serving two years in the Navy, he joined the Air Force during the Korean conflict and was stationed for two years in Japan. He received military awards for his Korean, United Nations, Japanese Occupation and National Defense Service.

In 1956, John married Shirley Bull and together they raised daughter Jayleen and son James while residing in Watsonville. John trained as a sheet metal craftsman and he and Shirley owned and operated the Freedom Sheet Metal Shop for 25 years. After retiring, John and Shirley enjoyed traveling the world. He always took his tennis racket with him on their travels.

In 2004, John and Shirley moved to Fallbrook to be closer to their children, grandchildren and great-grandchild. They joined St. Peter’s Catholic Community in Fallbrook and he became a member of the Fallbrook Tennis Club.

A Celebration of Life service will be held at Holy Eucharist Community Church in Corralitos, CA, on December 13 at 11 a.m.

Memorial donations may be made to San Diego Hospice (4311 Third Ave., San Diego, CA 92103) or to the charity of your choice.