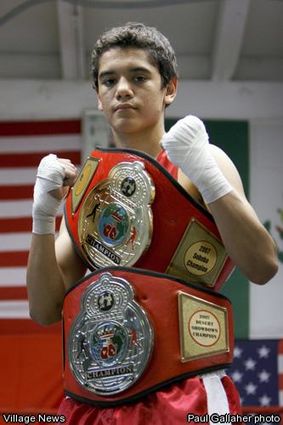 Joshua Morena, 14, shows off his championship belts from the 2007 Desert Showdown and Soboba Championships at Porras Gym, where he trains, in Fallbrook.

While many Fallbrook residents say more activities are needed in town for youth in order to keep them out of trouble, one man has stepped up and done something.

Jorge Porras has taken it upon himself to provide youth with a place to learn respect and achieve dreams, with the cost factor not being the most important.

A volunteer boxing and soccer coach for nearly 20 years with the Boys & Girls Clubs of North County, Porras has worked tirelessly with children whose parents did not have the money to pay for expensive sports equipment and league fees.

In order to give youth the ability to express themselves through boxing, Porras opened his own gym on the northern end of Main Avenue to teach children the discipline and sport of boxing.

Porras has been boxing since he was 7 years old and strives to share his passion for the sport with youngster.

Respect for themselves, their peers and their teacher is the first element taught to children at Porras’ gym, as Porras believes respect is what keeps youth from picking fights and using their newly learned techniques for violence, as well as avoiding peers who are negative influences.

As a member of USA Boxing, a national amateur boxing league, Porras is able to enter his students in tournaments across the state and has taken them as far as Sacramento to fight in matches, allowing them to show their skill and develop their techniques.

Porras is particularly proud of a student who won the Silver Gloves title in a recent competition and another who was a finalist in the Junior Olympics.

“We take them the best way we can,” said Porras. “Sometimes we don’t have the money we need for a hotel, so we’ll sleep in the van, but we make sure to take enough food to be able to share with everyone.”

Unfortunately, Porras injured his leg while working at an automobile dealership in Escondido and has been unable to continue working in the automotive industry because it has not healed properly.

In order to keep the gym running and pay for utilities, Porras has asked parents to make small donations. However, if a parent cannot help, Porras will still teach the child and have the parent pay when possible.

Patty Rios, a mother whose 17- and 14-year-old sons are training at the gym, has seen Porras’ generosity firsthand.

Rios and her husband were very interested in having their children learn how to box but found the equipment prices too high for their budget. When Porras was told the situation, he allowed the family to make payments on the equipment.

“It’s not just my family he’s helping,” said Rios. “There are families asking him for help in buying shoes, and he’ll have them only pay half up front.”

Besides giving equipment deals and affordable lessons to families, Porras pays the majority of the gym’s rent and utilities out of his pocket. He has asked some members of the community to support his boxing gym and team, but because they are unaware of the magnitude of his outreach, they have been unresponsive.

“We are not in the best of conditions, but we are still here, trying to offer something better for these youngsters,” he said, pointing to a bench where a few pairs of boxing gloves and helmets were available and then sweeping his hand toward the sagging floor and worn carpet near the punching bags.

“We really do need support and response from the community to keep this going,” he added. “We are missing a lot of things, but I am trying to help these young people obtain possibilities that even I wasn’t able to reach before.”

Porras sees the fact that he is unable to work in the automotive industry as an opportunity to help his community, even though his monetary sources limit what he is able to do with his students.

“I wish I could have a newer ring and equipment for them,” he admits, “as well as hire people to work with them.”

Since Porras does not have a real budget, he has not been able to hire other trainers to help him with the students. Instead, a volunteer helps him position the children into proper stances as well as practice and spar with them.

But Porras takes this in stride and still makes an effort to continue his students’ training, calling out commands to students throwing jabs, stopping them to have them correct their alignment and fixing students’ gloves and helmets before putting them in the ring.

Porras’ students are aware of the effort he makes for them, and in turn, show their respect.

,” said Rios, “and Michael, my older son, likes the fact that he explains things in a way he can easily understand.”

Rios hopes Porras is not only able to continue helping the children in his program but the rest of the community as well. 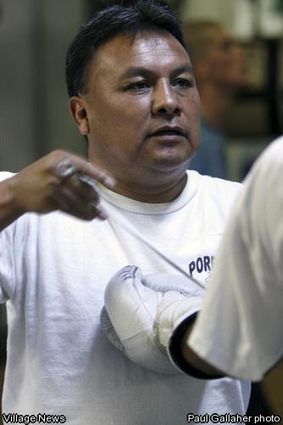 Jorge Porras offers tips to a young boxer as he laces up his glove at Porras Gym.

“He has enough heart for everybody,” she said.