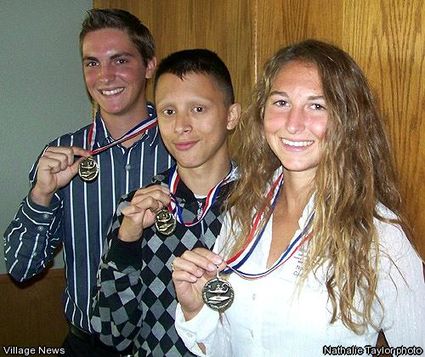 The November Fallbrook Community Students of the Month, Derek Majewski (left), Robbie Padgett (center) and Noelle Garcia, display the Lamp of Knowledge medals presented to them by the American Legion.

The students were presented Lamp of Knowledge medals from American Legion Post 365 representatives Frank Larkin and Karl Fekete. In addition to the medals the students were given “goodie bags” full of gifts and certificates from 16 local businesses, clubs and associations. Certificates of Achievement were presented to the honorees by representatives of local and regional elected officials.

To the students Connie Fellios, an instructor at FUHS, said, “You give us all joy and hope and are the strongest reason we love working in education.”

Sue Johnson, emcee, told the honorees, “You are stars that shine in our community.” She also said that she knows they will “persevere and do what they do well.”

Derek Majewski, a senior at Fallbrook Union High School, was nominated by Heather Smith of FUHS. He is currently serving as Student Body President and is a member of the Madrigals. In the past he has served as Freshman Class Vice President and Junior Class President. He is also Fallbrook High Rugby Club president, an AP student and an avid equestrian.

Derek also experienced something very rare as he was one of the young stars in the Fallbrook Film Factory’s feature-length film “My Necklace, Myself.”

“He is committed to only doing his best,” Smith said.

When the students were told that they were not going to be able to have a Homecoming parade this year, Derek rose to the challenge and came up with the idea of class community service projects in the form of improvements to Live Oak Park. He was met with a lot of resistance but convinced the school and the community of the project’s worth, then took the project to completion.

Derek, who plans to become a veterinarian, is planning to attend college at UC Davis. “I think of school as a job,” he said. “It’s my job to go to school.”

His family loves his sense of humor and his tenaciousness and spoke of him as a model son.

Robbie Padgett, a senior at Oasis High School, was nominated by Linda Poznanter.

“He is very, very bright,” she said, “and is really enthusiastic about history, math and science.” Poznanter also mentioned that he is an outstanding model of citizenship.

Robbie’s favorite interest is films and he is well versed in the inner workings of a film, especially special effects. He plans to study film directing at Palomar College.

Poznanter told the audience what makes Robbie a standout. “Robbie was in the midst of a serious family crisis,” she said. “It was a crisis that would have knocked most students out…but he did not allow sorrow or grief to slow him down.”

She also told the audience that Robbie has improved tremendously as a student and is dedicated to his schoolwork. Poznanter said that Robbie is a 3.0 student, which she mentioned is a tremendous accomplishment because he also works at Camp Pendleton as a cashier and helps out with his siblings at home.

“His strength and perseverance that he has had in the last three and a half years is going to pay off the rest of his life,” Poznanter continued.

Fellios said of Robbie, “You will definitely make a difference wherever you go.”

Noelle Garcia, a senior at Fallbrook Union High School, was nominated by Fellios. Noelle is a member of the California Scholarship Federation and is on the FUHS Academic Team. She also attended the Congressional Youth Leadership Conference in Washington, DC.

This highly disciplined student athlete is captain of the FUHS varsity cross-country and track team. A member of the National Charity League, she has volunteered for many local organizations; however, her favorites are working with the children at REINS and the volunteer time spent at the Angel Shop thrift store.

Noelle is an equestrian and her family described her as adventurous. She will attend California Polytechnic State University, San Luis Obispo.

Fellios said of Noelle, “She gives willingly and freely and is a humble person. She is a perfect ambassador for Fallbrook High School.”

Noelle had all four of her grandparents in attendance, with one set traveling from Arizona for the event.

The Fallbrook Community Student of the Month program is supported by numerous generous businesses and service organizations.