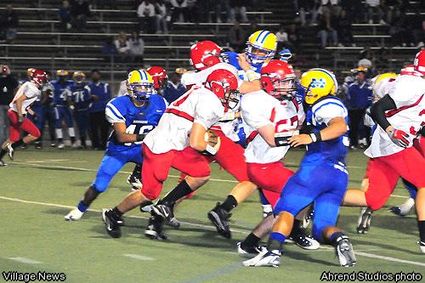 Fallbrook High School’s football team advanced to the CIF Division I quarterfinals tomorrow night at Escondido after defeating Mira Mesa by a 17-13 score in the first-round game November 21 on the Marauders’ field.

“I’m just real proud of our players. A lot of ups and downs and difficult situations, and they kept coming back,” said Fallbrook coach Joe Silvey.

The Warriors went from a ten-point lead to a three-point deficit to a four-point lead and then held off several Mira Mesa drives. The game was not decided until Fallbrook linebacker Cormac Kenan recovered a fumble with two seconds remaining.

“It was a tight game,” Silvey said. “We just had to keep battling all the way through.”

After Marquis Sumpter returned the opening kickoff 22 yards to the Warriors’ own 33-yard-line, runs of 15 and 10 yards by Jake Ware and an 11-yard run by Aaron Atkins helped the Warriors move the ball to the Marauder 6-yard-line.

A fumble Ware recovered cost Fallbrook four yards and the Warriors settled for a 27-yard field goal by Drady Harrington with 7:17 left in the first quarter.

Although Mira Mesa’s Damian Williams returned Harrington’s kickoff 36 yards to the Fallbrook 49, a fumble the Marauders were able to recover prevented a first down on the possession and Mira Mesa was forced to punt.

The next Fallbrook possession and the ensuing Mira Mesa possession also failed to produce any first downs, but after starting at their own 20 Fallbrook reached the Mira Mesa 43 before the first quarter ended.

On the ninth play of the second quarter and the 14th play of the drive, Ware ran up the middle for a three-yard touchdown with 9:15 left in the first half. Harrington’s kick made the score 10-0.

The first Mira Mesa play of the ensuing drive was an 11-yard run by Williams, giving the Marauders their initial first down of the game.

That was the only first down Mira Mesa would obtain on their possession, but the Warriors were then stopped without a first down and Harrington’s 48-yard punt traveled to the Mira Mesa 18, where Brandon Chambers began a seven-yard return.

Runs of ten yards by Williams and 17 yards by D.J. Jenkins brought the ball into Fallbrook territory; four plays later quarterback Kevin Ozier hit Chambers in the end zone for a 36-yard touchdown with 1:57 left in the half.

Tanner Hansen attempted a kick for a point after, but John Hayden was able to block the conversion try. The denial of that extra point would force the Marauders to seek a touchdown rather than a game-tying field goal two quarters later.

“Big play by John and big part of the game,” Silvey said.

Fallbrook’s final possession of the first half ended with a 52-yard punt by Harrington into the end zone, and the Marauders downed the ball to close out the half.

Williams began the second half with a 31-yard kickoff return to the Mira Mesa 32, and after a three-yard Jenkins run Ozier passed to Nathan Tajalle for 21 yards and then ran for 25 yards.

Ozier then once again found Chambers on the left side of the end zone and threw a 19-yard touchdown with 10:08 left in the third quarter. Hansen was successful on the kick to give the Marauders a 13-10 lead.

Fallbrook’s next drive ended with a Harrington 40-yard punt into the end zone, but on fourth and two at the Fallbrook 46 Williams was driven out of bounds one yard shy of the first-down marker and the Warriors took over on downs.

Although Fallbrook lost yardage on the first play of the drive, an unsportsmanlike conduct penalty against Mira Mesa moved the ball to the Marauder 42, and on the next play Sumpter turned a short pass into a 41-yard gain.

Ware’s attempt to get the final yard initially resulted in a one-yard loss, but on the next play he ran up the middle for a two-yard touchdown with 2:46 left in the quarter and Harrington’s kick provided the 17-13 score.

After a kickoff return and one first down, the Marauders were forced to punt.

The ball traveled to Fallbrook’s 8-yard-line, which is where the Warriors began the fourth quarter.

While no first down was obtained, Harrington’s punt was augmented by a holding penalty against Mira Mesa on the return, so the Marauders began their drive on their own 46.

Three first downs, including a third-down run and a fourth-down pass, brought the ball to the Fallbrook 15.

A four-yard gain was followed by a four-yard loss and an incomplete pass, giving the Marauders a fourth-down situation.

Ozier’s pass into the end zone was handled by Fallbrook safety Sal Siaton before falling to the ground with 3:57 remaining.

The fourth-down incompletion instead of the interception gave Fallbrook the ball on the 15 rather than the 20, but Siaton had accomplished his goal of not letting the pass be completed to a Mira Mesa receiver.

The Warriors didn’t obtain a first down after three runs but forced Mira Mesa to use two time outs, and the punt coverage brought down Williams at the Mira Mesa 39 with 2:55 left in the game.

Ozier completed a pass to Tajalle, who advanced to the Fallbrook 19, but a holding penalty returned the play to the Mira Mesa 23.

While Fallbrook had a handful of penalties, yellow flags were thrown more often against Mira Mesa.

“I think we played a pretty clean game all in all,” Silvey said. “We did have a couple of minor mistakes, but even those things we battled back from. It was a pretty good effort from our group.”

Ozier’s third-down pass was batted down by Kenan, and the fourth-down pass was incomplete to give Fallbrook the ball on the Mira Mesa 31 with 1:52 left.

The Marauders used their final time out, and while Fallbrook didn’t achieve a first down on four runs the Marauders took over with 26 seconds left on their own 22.

Ozier threw 29 yards to Chambers, moving the ball to the Fallbrook 49, and Ozier then spiked the ball to stop the clock.

Ozier’s next pass was intercepted by Sumpter at the Fallbrook 22, though Sumpter was ruled out of bounds and the Marauders retained possession with 11 seconds remaining.

Ozier’s ensuing pass to Chambers was completed, but a lateral attempt resulted in the fumble recovered by Kenan.

The loss gave Mira Mesa a final record of 6-5. Fallbrook improved its record to 5-6, including a 2-3 record in Avocado League play which gave the Warriors fourth place.

The twelve Division I playoff teams included five of the Avocado League’s six squads, and tomorrow’s Fallbrook-Escondido match is the first playoff match between two of the league’s teams.

The Cougars finished the regular season with an 8-2 record, including a 4-1 Avocado League mark worth second place in the standings. Escondido was seeded second in the Division I playoffs while Fallbrook received tenth-seed status.

The triumph over Mira Mesa was the first post-season victory for Fallbrook’s football team since 2003. That win was in the Division I semifinals, sending the Warriors to the CIF championship game.

“We’re trying to kind of get back on that track. I’m very excited about the win, but I also hope to build the program to where I expect to win games like that,” Silvey said.