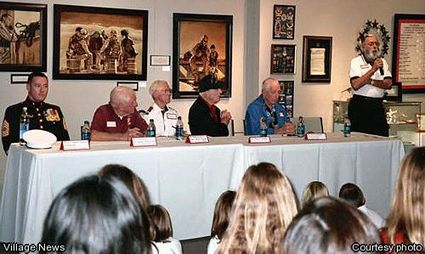 On September 27 of this year, the 110 Congress, 2nd Session, made the bill official, designating the week of November 9 through November 15, 2008, as National Veterans Awareness Week to emphasize the need to develop educational programs regarding the contributions of veterans to this country.

Junior high students from St. Peter’s Catholic School wanted to do their part by honoring their hometown veterans. On November 14 the students invited a panel of veterans to come to Fallbrook Art Center and speak to them.

At the same time, the Art Center was displaying their moving “Decades of Conflict: World War II to Present” exhibition.

As each veteran spoke, the students were able to hear firsthand the veterans’ heartfelt stories of bravery, devotion and honor in serving their country.

As the children listened, they were surrounded by many incredible artifacts, paintings, photos and historical works of art. The Veterans Museum and Memorial Center in Balboa Park had on loan a WWII portable organ and a chaplain’s field kit, which had been through many WWII battles.