JV Warriors come back to beat Patriots 49-44 in overtime 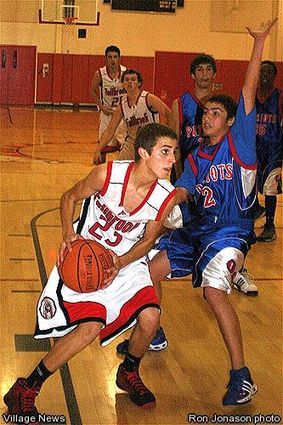 Warrior Nathan McDonald prepares to take a shot against a Patriots defender.

On December 11, the Fallbrook JV basketball team hosted the Orange Glen Patriots. Compared to Orange Glen, the Warriors were limited by the lack of players of large physical stature.

Despite an initial lead, Fallbrook never regained it until the final minutes of regulation play. Clutch plays by the Warriors forced overtime en route to a 49-44 victory.

The game began on a fast pace. However, both teams played a sloppy first half and committed numerous turnovers.

The Warriors missed several great looks and the lay-ups failed to trickle down the basket on many occasions. Fallbrook also got...