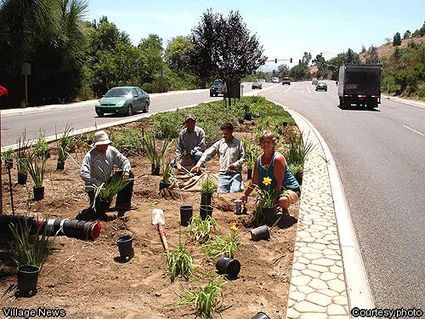 The Fallbrook Beautification Alliance (FBA), the organization that focuses on keeping Fallbrook green and beautiful, is currently seeking sponsors to help with maintenance costs of the South Mission Road medians.

FBA President Jerri Patchett said the group is looking for community members who will be able to sponsor median maintenance for one month out of the year by donating $1,000 to pay for the needed weeding, pruning and general upkeep of 32,065 square feet of planting area.

In 2008, the FBA spent nearly $15,000 on the medians. This included the costs associated with monthly maintenance, adding new plants as needed for more color and improvements to the irrigation system.

Fallbrook Public Utility District contributes reclaimed water for irrigation of the medians each year. Last year alone they donated 1,638 gallons of water at a cost of nearly $3,000.

In order to cover the cost of maintaining the medians each year, the FBA hosts the annual Fourth of July event at the Grand Tradition.

Besides funds from this event, the FBA also receives contributions from individuals and organizations for ongoing maintenance of the medians.

Besides normal maintenance, the FBA tries to be prepared for the unexpected, such as cars running into and damaging the medians, crushing flowers, trees and irrigation systems.

“A recent accident on South Mission took out one of our oak trees and 75 rosebushes, which will cost about $7,500 to replace,” said Patchett.

The FBA is trying to collect for the damages through the driver’s insurance company; however, if that is not successful, it will have to come out of the FBA maintenance fund.

Presently, Otis and Linda Heald have agreed to sponsor the South Mission medians for January, but 11 other sponsors are needed for the remaining months.

Don McDougal, another member of the Beautification Alliance, said anyone can sponsor the medians, and they will gladly accept one-time donations in any amount in order to expand the flowerpot project in downtown Fallbrook.

In the upcoming year, the FBA is planning to rework the existing irrigation systems and add new irrigation to median sections that had none.

They also have plans to add more landscape material to the medians at a cost of approximately $20,000.

McDougal hopes Fallbrook residents and businesses will become willing sponsors, especially since the FBA will have to cut back on its work if help isn’t provided through the community.

“There has been a slowdown in donations,” he said. “Fortunately, people step up because they want us to continue our work.”

Donations and contributions can also be made online at http://www.fallbrookbeautification.org.