88-year-old gets hole-in-one for Christmas 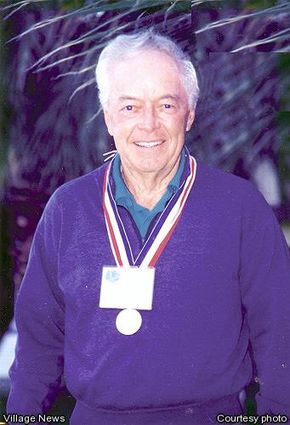 Richard Parry wears one of the gold medals he has won playing tennis in the Senior Olympics. Despite having just recently returned to playing golf, Parry hit a hole-in-one last month.

A 35-year resident of Fallbrook, Parry started playing golf 60 years ago. He switched to tennis 20 years ago but recently returned to golf when he could no longer play tennis. He had only played three rounds of nine holes since taking up golf again.

Parry had two hole-in-ones 39 years ago when he was playing in Utah but said both were bad shots that turned out lucky. However, this latest hole-in-one was a good shot.

“I hate to admit I used a driver where I used to hit a five-iron,” Parry said. “I say it was mostly luck!”