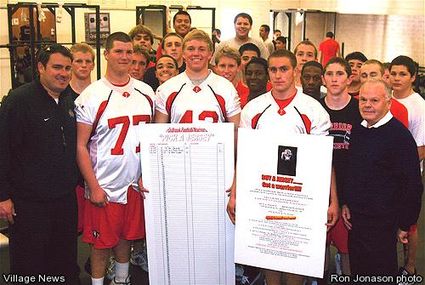 Does the idea of having your very own varsity Fallbrook Warriors football jersey appeal to you?

Whether you are a parent or other relative who would like to show support by wearing a certain young man’s number to the games or a die-hard member of the community who wouldn’t miss a Warrior football game and the resulting Friday Night Lights fun for anything, the team has an opportunity for you!

Warrior Football has kicked off a new ‘Buy a Jersey’ fundraising program that allows fans to take their spirit to the next level and even pick the player number they would like.

To buy a jersey requires a $250 tax-deductible donation to the program. Then, you sign up on the roster indicating which jersey number you desire.

Because numbers have not yet been assigned for the 2009 season, which will begin in August, those wishing to wear a specific player’s number should indicate the player’s name on the roster so that the correct number will be issued.

Others can pick any number they desire between 10 and 99.

In addition to getting your very own Warrior jersey, donors’ names will be listed in the 2009 program as ‘Jersey Sponsors.’

Coach Joe Silvey said the fundraising program is designed to help purchase new uniforms for the team, something he feels is badly needed for several reasons. The first reason is the age and condition of the existing (old) uniforms.

“The present jerseys are several years old and many of them have become torn and will be unusable for next year,” said Silvey.

His next reason has to do with the team’s competitive edge.

“[The old uniforms] fit very loosely, which affects our competitiveness on the field,” said Silvey. “ too easy to tackle us, too easy to hold us.”

In addition to being of a more modern design, the durability of the new style is better. “These new uniforms are expected to last at least three seasons,” said Sam Logan, co-owner of Major Market and longtime football booster.

In addition to these qualities, new uniforms are expected to increase team spirit and morale.

“I know our players will take great pride in wearing these new jerseys in the fall and in representing their school and their town,” said Silvey. “I hope that supporters of the program and members of the community will also feel excited about the opportunity to join in this effort and once again stand with their football Warriors.”

If you are interested in buying a jersey and supporting Warrior football, visit Major Market’s customer service area in the front of the store. 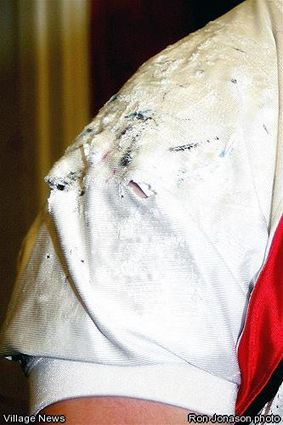 The roster for jersey sign-ups is posted there and Major Market staffers will gladly assist donors with the process.

As an added incentive, the first 40 people to purchase a jersey before March 1 will be invited (along with their choice of guest) to a special ‘Wild Game Dinner’ to be held on Saturday, March 7, at the Fallbrook home of longtime football booster club members Sam and Ann Logan.