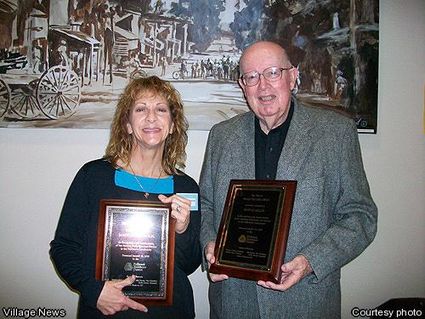 Madelyn Lewis, public health nurse for the County of San Diego and Don Luallin, executive director of the Fallbrook Food Pantry were honored with the Fallbrook Healthcare District

At the Community Collaborative Breakfast held Saturday, January 24, the Fallbrook Healthcare District launched a program called Healthcare Heroes to honor individuals who, by the quality of their service, demonstrate exceptional commitment to the health and wellbeing of local residents.

The first two recipients of the award were Don Luallin, executive director of the Fallbrook Food Pantry, and Madelyn Lewis, RN, a public health nurse assigned to the Fallbrook area.

Lewis began working in Fallbrook in 2004 and has wholeheartedly given her time and effort to multiple healthcare endeavors, as a healthcare professional and as a volunteer. She has assisted with the Community Collaborative Committee, the Medicare Part D project, the expansion of the medical history component of the high school’s athletic exam, the diabetes project, the energy drink revolution, the annual Health Fair, the CATCH committee, the 2007 Firestorm relief center and more.

Luallin, a volunteer with the Fallbrook Food Pantry since 1998 and executive director since 2002, is best described as half employee, half volunteer, due to the extensive amount of time he gives to the organization. Luallin, known for the quality of his work and his skill in managing the assets of the organization, coordinates a team of 50 to 60 volunteers. Under his leadership, the Fallbrook Food Pantry provided food to nearly 80,000 people in 2008.

The Healthcare Heroes award program was introduced to the Fallbrook Healthcare District by administrator Vi Dupre, who developed the idea after attending an awards ceremony for a similar program in another district.

“In the healthcare community, there are a lot of people who are very committed to their work, and they don’t do it for the money or recognition,” Dupre said. “The Healthcare District is very pleased to introduce this program to honor those individuals who go to the extreme to serve their community.”

In order to be considered for the Healthcare Heroes program, the individual must be working or volunteering in an effort relating to the health and wellbeing of others, go “over and above” what is expected of their position and whose commitment and passion “bring charisma, joy and commitment” to the program to which they give their time.

Dupre said a Healthcare Heroes candidate knows that he or she is not irreplaceable but still motivates others to expand their programs to heights that would not have been reached otherwise.

Dupre believes Luallin and Lewis are two prime examples of the giving and hardworking individuals the district wants to recognize.

“Fallbrook is a community of volunteers and charitable nonprofit programs,” she said. “It is full of ordinary people doing exceptional things.”

Though the award is not monetary, Healthcare Heroes receive a plaque and the respect of the community, she said.

“The board will recognize two individuals a year, making this award truly meaningful,” said Dupre. “Large corporations receive well-deserved accolades for their charitable work, but this is a way to honor the ‘little person.’ That’s truly an honor.”

Dupre said healthcare providers who are nominated as candidates for the Healthcare Heroes program but not selected may be considered again in the future if they continue to qualify.

“We had to define what a Healthcare Hero is,” explained Dupre. “[For instance], basketball players are called heroes, but in truth are phenomenal athletes. This is an opportunity for us to honor those who serve the community.”

Nominating an individual for consideration must be done in writing to the Healthcare District. It must detail why the individual should be considered and why he or she is a hero.

Nominated candidates will be brought before the Community Collaborative Committee, who will check for eligibility, then make recommendations to the Healthcare District board for selection.

“We hope that the community will embrace this program,” Dupre said. “We need the community members’ input in the next year to build the program and provide insight.”

Questions about the district and its programs may be directed to the Fallbrook Healthcare District office at (760) 731-9187.