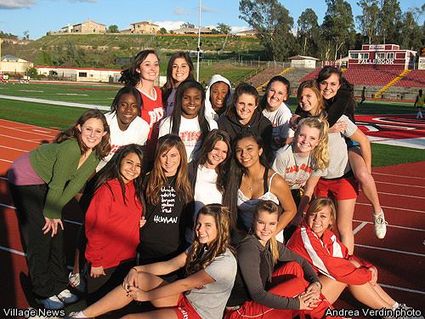 When it comes to fueling team spirit at a Fallbrook High School football or basketball game, no one encourages more cheers and garners more smiles than the cheerleading squad.

Whether the home team is winning or losing, these girls exemplify team spirit with well-placed stunts and dance moves.

But there is more than meets the eye to being a varsity cheerleader: two- to three-hour practices, injuries and bad weather are just an average day for these dynamic young ladies.

During the football season, the squad typically practices four times a week, with an appearance at the Friday night football game. During basketball season, the girls have two practice days and two performance days each week.

But their time spent cheerleading does not deter these girls from involving themselves in other extracurricular activities.

“A lot of the girls [on the squad] perform on the school dance team and are active in the Associated Student Body <ASB> or in sports like softball and rugby,” said Megan Estrada, Fallbrook High’s varsity cheerleading coach of more than three years. “The girls are involved in a lot of school activities.”

In order to be a member of the varsity cheer squad, each girl must go through week-long tryouts and be judged on their dancing and cheer abilities.

Last year, out of the 75 to 80 girls who tried out to be on the varsity squad, only 18 were selected.

“It’s so exciting when you get to advance to a higher [cheerleading] level, said one captain, Alex Ogden, who made the varsity squad as a sophomore. “Once you’re on the team, you know that you have the foundation it takes.”

But being a cheerleader means more than just cheering on the athletic teams.

“The expectations when you are on a varsity team are so much greater,” said Kathleen Kopitzke, also a cheer captain. “It’s a prize that you’re even on the team.”

However, just because the girls have bright spirits doesn’t mean their grades are lacking.

“We aren’t the stereotype cheerleaders,” said Kopitzke. “A bunch of us are in AP English and math. We’re more like a big, spread-out family.”

Along with cheering at games, the varsity squad has also had the opportunity to compete for national titles. They won first place at the National JAMZ Cheer competition in Los Angeles last year.

This March, the squad will be competing in the NCA Nationals.

“The cheerleading competitions really are a sport,” said Jasmine Morrow, a senior captain.

“On the junior varsity squad, the girls are more caught up with being cheerleaders,” said Leah Shadle, a dance captain. “For [varsity], it’s a job that means more to us. When we are in uniform, I have to be a role model.”

Estrada is particularly proud of her squad for being so diverse in their interests but is also proud of their dedication.

“This isn’t a cheap sport to get into,” said Estrada. “Each girl spends about $1,200 on uniforms, shoes, practice outfits and going out of town for competitions.” 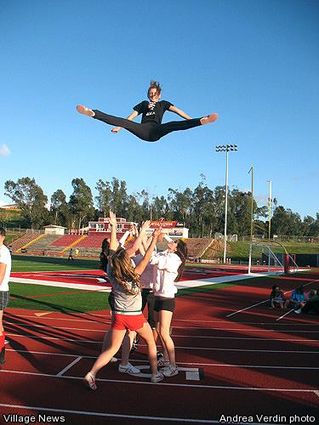 The team will be selling raffle tickets this Saturday and Sunday, January 31 and February 1, in front of Albertsons and Major Market to earn back some of the money they have spent on their competitions.

Still, the girls’ high spirits, outgoing personalities and love for cheerleading is apparent.

“Sometimes I get tired and don’t really want to practice,” said Kopitzke. “But once I’m here, it’s all worth it.”