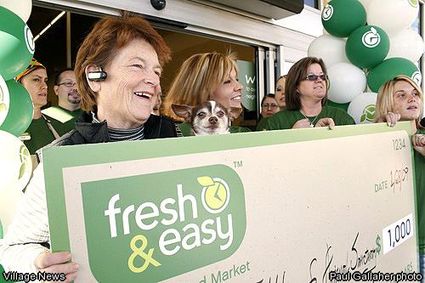 Fallbrook Animal Sanctuary director Janet Lucore (left) and her dog Pete accept a $1,000 check from the staff of Fresh & Easy during the store

FALLBROOK — The Fallbrook Animal Sanctuary was presented with a $1,000 donation from Fallbrook’s Fresh & Easy store on January 28 as part of the market’s one-year anniversary celebration.

“We want to thank our customers for a fantastic first year,” said store manager Eric Arnold. “We truly appreciate everyone’s support and couldn’t have accomplished so much in one year without it.”

Fallbrook Animal Sanctuary was selected by the store staff from neighborhood nominations made through Fresh & Easy’s Web site. The donation is one way the company is thanking its neighbors for their continued support, store officials said.