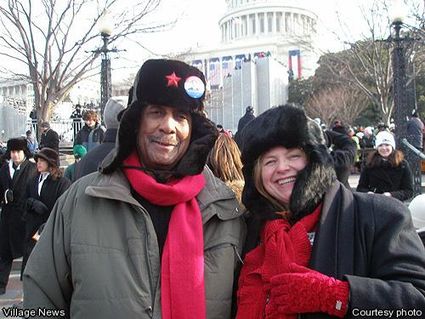 Charles Cheathem and his wife, Elizabeth, at the Capitol on Inauguration Day, January 20.

As millions across the country watched the inauguration of President Barack Obama on their television sets, one Fallbrook resident was able to see this historical moment in person.

Charles Cheathem, counsel general for Papua New Guinea, is a Fallbrook resident who was granted the opportunity to attend the inauguration in Washington, DC, on January 20.

Cheathem, who claims his grandfather was a slave, was thrilled to witness the event.

“It was a fantastic experience for me, said Cheathem. “The throng was of all races and ages, but I was particularly struck by how many young people attended the ceremony. I was moved by how many interracial components there were, and not one person had a negative attitude.”

While Cheathem did not get the opportunity to talk with Obama on his trip to Washington, he met the future president in February of last year at a campaign fundraiser in La Jolla.

“Obama ushers in a new era in politics,” said Cheathem. “We have become plain tired of racial animosity and the way white politicians kept doing the same things.”

Cheathem believes that by electing Obama “young people will be attracted to democracy by Obama’s ‘rock star’ qualities.”

Cheathem also stated he believed Obama has been “astute” in his selections in his Cabinet and has already had a “profound effect” on the Republican Party, evidenced by the election of Michael Steele as the first black Republican National Convention chairman.

One reason Cheathem said he was proud to see Obama become president was because of his grandfather, who was born a slave.

“I was unsure that I would ever see such a thing in my lifetime,” Cheathem said. “As a matter of fact, I didn’t think it was credible until the late stages of the campaign.”