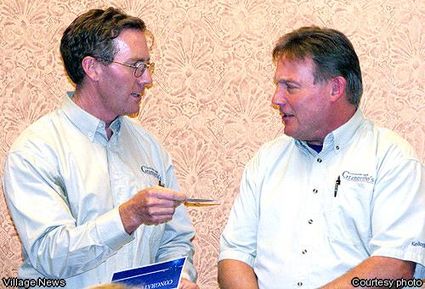 Kevin Grangetto (left) presents an award to Dave Paulino, manager of the Fallbrook store, for his 30 years of service to Grangetto

The staff of Grangetto’s Farm & Garden Supply was put in the spotlight at the company’s annual meeting at the Best Western Hotel in Escondido on January 22.

During the event, Dave Paulino was honored for his 30 years of service to the company and Fallbrook employee Gene Chavez was recognized for his superior help.

Paulino, manager of the Fallbrook store, was originally brought onboard at the Grangetto’s Valley Center location back in 1979 as a driver and warehouse worker.

His conscientiousness and outstanding work ethic propelled him up the Grangetto’s ladder, earning him the title of store manager in Valley Center in 1986.

Paulino was transferred to Fallbrook in 2006.

“Dave Paulino was recognized for 30 years of service and received a $500 Visa gift card,” said Kevin Grangetto, president of Grangetto’s Farm & Garden Supply. “Dave is an excellent manager and has inspired his staff.”

Recognized for superior customer care, Chavez, who has been an employee with the Fallbrook Grangetto’s since last April, can be described as a ‘superstar’ counter salesperson.

“He was [mystery] shopped twice during the year and received 100 percent on each shop,” said Grangetto. “Gene was recognized at our company meeting and received a plaque recognizing his accomplishment.”

Utilizing the Mystery Shopping program since 2003 has been a wonderful tool, Grangetto said.

“This program has helped us reward and motivate those individuals at point of sale to give their attention to each customer who shops with us,” explained Grangetto. “Our goal is that we surpass the expectation of each customer who visits our stores.”

When a mystery shopper strolls into Grangetto’s, a checklist of 10 items worth 10 points each is used to evaluate an employee.

The mystery shopper never identifies himself and the results of the visit are released company-wide.

“We are able to tailor our shopping criteria to reflect the things we feel our customers are most interested in receiving,” said Grangetto.

The Mystery Shopping program has helped their management team accept accountability for both themselves and their staff members, while adhering to a particular set of standards.

“We shop our managers as well in this program to ensure they are giving the customer the service expected,” said Grangetto. 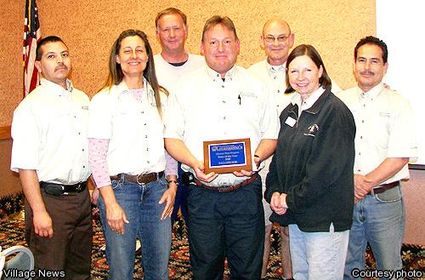 Despite the economic climate, Grangetto’s has not wavered from their position that customer service remains their number one priority.

Be it on the phone or face to face, said Grangetto, giving their customers the service and advice that they have come to expect over the years is imperative.

“We thank our customers for their business and do appreciate them,” he said.