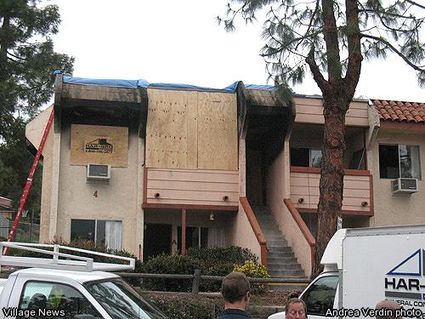 Restoration workers stand by at Pine View Apartments on Alturas Road where a fire affected three apartments on February 12.

Residents of a low-income apartment complex in the 1100 block of Alturas Road had a fiery wakeup call in the early morning hours of Friday, February 12.

The fire occurred at Pine View Apartments around 6:30 a.m. in one of the second-story apartments and was caused by a lit cigarette that was left unattended, fire officials said. As a result of the fire, two adjoining apartments were damaged.

The resident whose apartment caught fire is known by his first name of “Ray” to his neighbors and is described as a man in his 50s who suffers from mental challenges and is prone to mood swings. D...