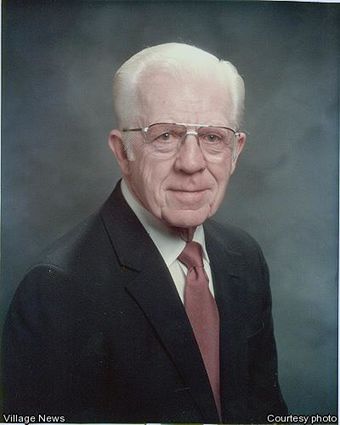 Henry Popko passed away on February 20, 2009. He was born in Gypsy, PA, on October 6, 1914. He grew up in the small town of Monaca, where he eventually became a football star at Monaca High School during the early 1930s. He also played football during his college career at Slippery Rock University.

After earning his degree he began a career in teaching that would take him to the Los Angeles area. As head coach at Monaca Junior High School, he helped lead a basketball team to Western Penn championship in addition to going undefeated as the head football coach for five years.

He married Pauline Lutsock in 1939. In 1953 they moved with their two sons to Inglewood, CA, where he taught at Monroe Jr. High. He then became the principal at Warren Lane Elementary School in Inglewood.

After retirement he enjoyed repairing old clocks and remained very active in the Inglewood community. In 2003 he moved to Fallbrook so he could be closer to his son and his family.

Mr. Popko’s survivors include his sons and their wives, Gene and Karen Popko of Fallbrook and Playa Del Rey, CA, and Richard and Beverly Popko of St. Helena, CA; four grandchildren, Ty, Kerry, Rick and Clay Popko; and four great-grandchildren. He is also survived by his sister Virginia Swink of Monaca. He was preceded in death by his wife Pauline “Polly” Popko.