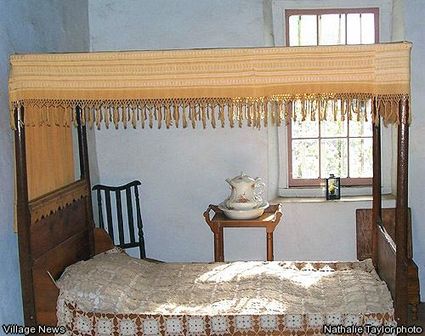 The adobe is furnished with pieces typical of the 1800s.

I had toured the park before but had never taken time to visit the large adobe that is the hub of Old Town, La Casa de Estudillo.

There was plenty of history to ponder with thirteen rooms furnished with period pieces. The casa was the home of Capitán Jose Estudillo, a retired San Diego Presidio comandante who began construction in 1827 and completed it in 1829. The land was granted by Governor José Echeandia when California was still a part of Mexico. The house remained in the Estudillo family until 1887. The adobe was restored in 1908 by the Spreckels family and became a state park in 1968.

The restored casa furnishings, down to the carpets and candlesticks, are reminiscent of the 1800s and were provided by the National Society of Colonial Dames of America.

The casa itself is built in a U-shape with a lush garden in the inner courtyard. There are several bedrooms, a living room, kitchen and even a chapel. Adjacent to the chapel, Capitán Estudillo provided comfortable quarters for the priest.

Several beds in the casa were draped with canopies which helped retain heat as well as protect the sleeper from insects that may have fallen between the cracks of the clay tile roof.

A large kitchen and reconstructed outdoor adobe “horno,” or oven, was where the servants prepared food. The horno was used to bake bread and was heated with a fire, then the ashes were removed and the bread would bake in residual heat.

Adobe, while fashioned of mud and straw, then sun-baked, seems to defy the elements. The casa’s adobe walls, which are three to five feet thick, are still strong after 182 years.

There is more to see at the park, including La Casa de Machado y Stewart, which houses artifacts that reflect an ordinary style of life. You can’t see it all in one day, but the good news is it’s only about fifty miles down the road. 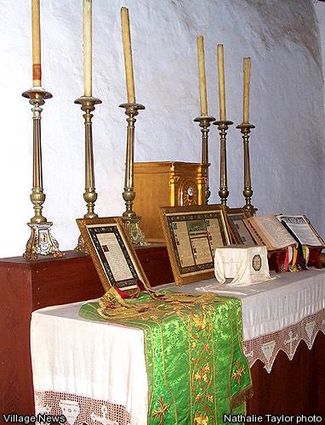